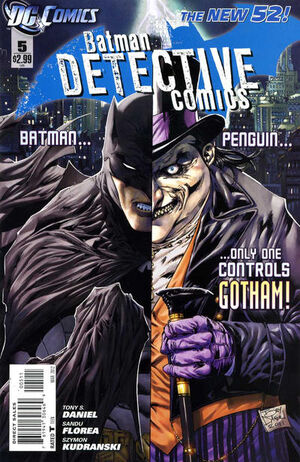 Appearing in "Wheel of Misfortune"Edit

Synopsis for "Wheel of Misfortune"Edit

Eli Strange has not made his father proud in some time, having recently reappeared after nearly sixteen years without speaking. Tonight doesn't help matters, as he prepares to enter a poker game with a mobster known as the Mad Russian.

Eli talks his way in with a diamond pet-collar, which he uses to get two-hundred-thousand dollars worth of chips - unexpectedly high. Despite his apparent nervousness, Eli cleans up, winning nearly all of the chips away from the other thugs. As he prepares to leave with his winnings, a large bruiser forcefully suggests that he let the host try to make his winnings back.

Rather than play another hand, the Mad Russian grips Eli's wrist and discovers that he had been cheating with a special device. Meanwhile, one of the Mad Russians' men reveals that the diamond collar was a fake because he found the real one in a car outside. Additionally, they have been robbed of all of their cash. In its place is a small cat idol with a note attached saying "Gotcha."

Moments later, Catwoman appears, announcing that the money they had been playing with now belongs to her. When they pull guns, she lashes out with claws and kicks that draw a lot of blood. With the thugs thus dispatched, Catwoman advises Eli to return to his father and safety. She suggests he leave before he has to see what she intends to do to the thugs next.

As Eli runs home, his father, Hugo Strange watches through a surveillance camera, and decides that he should take an interest in his son's future.

Retrieved from "https://heykidscomics.fandom.com/wiki/Detective_Comics_Vol_2_5?oldid=1660366"
Community content is available under CC-BY-SA unless otherwise noted.