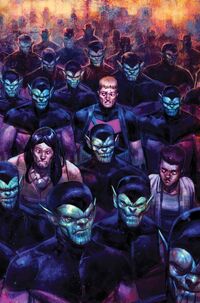 Base Of Operations
Tarnax II; multiple locations in the Andromeda Galaxy and the Milky Way; formerly Tarnax IV, Skrullos

Average Height
5'5" (Around the same as humans).

Special Adaptations
Pointed ears, corrugated chins, green skin. Most males are bald and have no facial hair. Females have full head of hair. Most Skrulls are physically malleable, able to alter their shape size, and/or colour at will.
Origin

Origin
Alien; Deviant branch of the Skrulls of Skrullos

The ancestors of the Skrulls were allegedly created by the Xorrians (along with all humanoid life-forms, such as Kree and Humans) from their own DNA.[11][1] These Skrull ancestors resided on Skrullos, a planet in the Drox system. The Skrulls were once a peaceful race, until the Celestials arrived at Skrullos over a 100 million years ago. The Celestials went on to split the Skrulls into three races: the baseline Skrulls, with no special abilities but the potential to evolve, the Deviant Skrulls, with shapeshifting abilities, and the Eternal Skrulls, who were given longevity and super powers. Almost immediately, this led to war, in which the Deviant Skrulls exterminated the other two races.[12]

Thus all modern Skrulls are descendants of the Deviant branch. The Skrulls later split again, giving rise to the Dire Wraiths, a parasitic race that could still shape-shift and had use of magic, but were not as technologically advanced as the Skrulls. Dire Wraith's are analogous to the Skrulls as vampires are to humans.[12] At some point, the Skrulls became genetically frozen in place, unable to evolve further, as punishment for a single Skrull abusing the power of the Crystal of Ultimate Vision, located within the Citadel of Light and Shadow.[13] It no longer appears to be the case as an increasing number of Skrulls are born as mutants, possessing the K-gene which gives them mutations and/or superhumans powers resulting in Skrull Mutants.[14]

During the reign of Dorrek, 10s of millions of years ago, the empire reached neighboring galaxies becoming an intergalactic empire.[15] Skrull science is generally at a higher level than the science of human civilization, having achieved a high level of science before life emerged on Earth at least 2.5 billion years ago.[16] Skrull science created the first Cosmic Cube thousands of years ago, though it ended disastrously for the Skrull Empire. As upon becoming sentient the cube destroyed two-thirds of the inhabited worlds in the Andromeda galaxy, thereby plunging the Skrull Empire into a dark age of barbarism.[5][16] The Skrulls were ruled by an Emperor or Empress, who had absolute power.[5]

Skrulls are capable of producing hybrid offspring with humans and Kree.[2]

On Earth-9997, it was revealed that Thanos was a hybrid of an Eternal and a Skrull, as his mother Sui-San was in fact a Skrull.[17]

A conclave called the Knights of Infinity are a nomadic band of Kree/Skrull hybrids who were gathered and created by the first of their kind; Dorrek Supreme, who is the heir to the throne of a Kree/Skrull alliance.[18]

An uncommon birth defect in Skrulls is being born without the ability to shape-shift. Skrulls afflicted with this abnormality include Raze,[19][1] Titannus,[20] and Talos the Tamed.[21][1] This genetic defect can also grant upper strength and endurance to some of those afflicted, including Talos the Tamed.[1]

Skrulls are susceptible to various forms of cancer. The Super-Skrull contracted leukemia due to prolonged exposure to the radiation in the Van Allen Belts.[22] The Skrull prince Klundirk was also diagnosed with an unknown form of cancer.[23]

On Earth-829, Skyppi contracted a form of tuberculosis common to the Skrull species.[24]

The Skrulls are evolutionarily stagnant. They can not evolve naturally and can only move forward genetically through artificial means.[1]

Despite this, mutants (a.k.a K-class deviants) have been observed, particularly on Carpiax-IV, where Lord Merek's fecundity-supplement program resulted a higher number of K-class births. It was common to cull Skrull mutants in the interest of genetic purity. One group of Skrull mutants, Cadre K, was rescued and trained by Professor X.[25]

The Skrulls are present in many realities, with more or less important variations in their history, appearances, and biology.

Weapon Formation: Skrulls are able to use their shapeshifting abilities to form weapons with parts of their bodies. For instance, they can shape their arms into blades or clubs including guns. This ability makes them dangerous hand-to-hand combatants.

Shapeshifting Limitations: Skrulls can only take on the appearance of person and none of that person’s characteristics or, in the case of superhumans, their powers.[32] When they imitate an inorganic object, they take on its appearance, but not its properties. The inability to replicate powers does not apply to genetically modified Super-Skrulls.[33]

Very high decibel sounds have been shown capable of temporarily disabling a Skrull, and in the case of a Super-Skrull, will cause them to lose control of their powers.[34]

At the moment of death, Skrulls revert to their original form.[35]

Type of Government: Totalitarian monarchy under a single Emperor or Empress (succession disrupted by destruction of Tarnax IV, death of surviving royal family members, and ensuring civil wars, reinstated with the crowning of the new Emperor, Kl'rt I). Assisting the Emperor are ministers and councils.[42][43][44]. The empire itself is administrated by prelates and governors.[45][46] Throughout the Skrull empire, in every world that is ruled by the Skrulls only one race is permitted to represent the inhabitants of that world, the Skrulls.[47] Worlds that voluntarily joined the Skrull Empire are granted varying degrees of autonomy. It also maintains profitable trading relationships with pacifist worlds that the empire has peace treaties with.[5]
Level of Technology: Superior to Earth; Advanced warp-drive star-ships,[48] intergalactic subspace FTL (nearly instantaneous),[48] teleportation,[49] force fields,[50][51] cloaking technology,[52][51] miniaturization technology,[53] shape-shifting technology,[54] robots,[54] mecha (humanoid and multi-legged),[55][56] cybernetic technology,[57] planet busting weapons,[58][59] star killer weapons,[60] genocidal biological weapons,[51] intergalactic FTL subspace communications (nearly instantaneous),[61] intergalactic radar,[62] hyperspace radios,[63] intergalactic sensor grid,[64] intergalactic transportation beam,[65] missiles,[59] space torpedoes,[66] genetic manipulation/engineering (Super-Skrulls), quantum weapons,[67] interdimensional portals,[68], cloning,[69] and directed energy weaponry (either beam or pulse weapons and either particle, neutrino or photon weapons).[70][71][72]
Cultural Traits: Warrior Race. The entire Skrull economy is built around its military pushing their tendency to instigate wars and campaigns of conquest.[73] Universal conquest is their goal, to bring peace to the cosmos therefore they must conquer and subjugate every inhabited world in the cosmos.[66][44] Despite this many Skrulls live peaceful lives.[74] Many of them truly believe in their gods and have immense love for their families. Professor X could sense the goodness and nobility of the teeming mass of billions of Skrulls on Tarnax IV.[75] They are a species, that enjoys art and beauty, in which even it's warriors enjoy listening to the intricate social calls and mournful mating calls of wildlife.[76] Skrulls have a code of honor, though not all follow said code. Warriors have been known to meet enemies in equal numbers (e.g. one on one or a squad vs a team).[77][78] Respecting and honoring enemies of great valor and skill.[62][43] They are also known to repay their debts.[79] It is also a race which is known for being vengeful.[63]

Retrieved from "https://heykidscomics.fandom.com/wiki/Deviant_Skrulls?oldid=1655775"
Community content is available under CC-BY-SA unless otherwise noted.