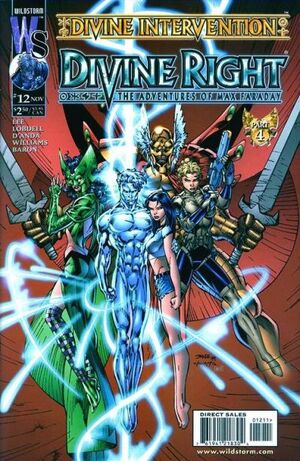 Appearing in "Divine Intervention 4 of 4: Hail and Fairwell"Edit

Synopsis for "Divine Intervention 4 of 4: Hail and Fairwell"Edit

Susanna holds a dying Max Faraday in her arms. He apologizes to her for all he did. The Wildcats, Gen 13, and The Fallen look on but can't do anything for Max. As Max spasms with pain, reality shifts around them. Lazarus tells Susanna that she must kill Max in order for the universe to be righted once again.

Orbiting high above the Earth amidst The Creation Wheel, Max tells them he doesn't need any of them anymore. Ladytron gets tired of talking and tries to attack but Spartan stops her. Rainmaker gives Emp the idea that if they worship Max, it might help. Emp agrees and Max is overjoyed they've finally surrendered.

At I.O. headquarters, the satellite connection is restored and it is clear Max has won.

Max yells at Lynch and company back on Earth, realizing this was all part of their plan. He teleports them to The Creation Wheel to join him and the others. But Susanna is not alone as The Fallen appear and begin the assault against Max. Because they possess part of The Creation Equation, they are able to restrain Max so Susanna can kill him. But she can't bring herself to do it. She drops the sword and they embrace for a kiss. For a moment, Max reverts back to his old self, realizing that despite all he's done, Susanna still loves him. It is then, while he is still mortal, that he summons Tobruk's sword and impales himself with it.

Max lies dying in Susanna's arms. She realizes that she must finish him off if this is to end. They tell one another "I love you" and then Susanna stabs make with the sword. Max's essence is hurled into the farthest reaches of time and space. And it was not the Orbs of Power that gave them all their powers, but it was love-Max's Divine Right.

Devan and Jenny are newly married. They head to Susanna's place to see her. Susanna is still sadden by Max's death. But as she surfs the net, an instant message pops up from Max. Devan and Jenny enter Susanna's apartment but she's suddenly not there. Devan looks on Susanna's computer. He and Jenny both smile as they see Max and Susanna together on the screen.

Retrieved from "https://heykidscomics.fandom.com/wiki/Divine_Right_Vol_1_12?oldid=1425018"
Community content is available under CC-BY-SA unless otherwise noted.