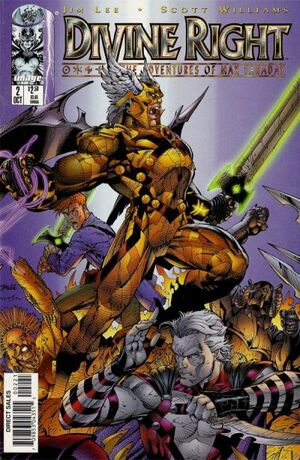 This guy's gonna rip my brain out -- do I look okay?! We are so screwed!

Max is fantasizing about his internet love interest Susanna Chaste as he and Devan drive down the road. But he's snapped out of it as Devan yells to him that he's going to wreck the vehicle. When Devan realizes Max was daydreaming about Susanna again, he pokes fun at him by telling Max she probably isn't even a woman. As Max defends his love for Susanna, two creatures of The Rath jump on the hood of his car.

Christie Blaze is dead but she finds herself naked and enveloped in a white light. Exotica of The Fallen appears before her and tells Christie she can return but there is a price. Christie accepts.

Christie awakens on an autopsy table with two coroners standing over her. The coroners run off in terror. Brande and Exotica appear before Blaze. Brande gives her new clothes and weapons and tells them that they must protect The Chosen One who is being pursued by The Rath. She agrees to join them. As they head out, Brande glances back at Christie's body which still lies on the coroner's table.

Back in San Diego, The Rath continue to attack Max's car as he tries to escape. Devan is able to knock one of The Rath off the car with a baseball bat and he slows the others down by throwing Max's pizza deliveries at them. A truck runs over the disoriented Rath and the guys think they've evaded them. But then another agent of The Rath appears and smashes the car as the two guys jump clear.

Meanwhile in Jerusalem, Cardinal Lazarus is speaking with the Matriarch of the Coda. He wants her help to recover the Creation Equation. She declines at first but after he reminds her that everyone in the world has a vested interest in the Creation Equation, even the Coda, she agrees.

Max and Dev make it to Phatboy Pizza where Max works but The Rath are still in pursuit. The Rath kill Max's boss and prepare to kill Devan too. Suddenly, a surge of power emanates from Max and the entire pizza restaurant is destroyed. Amidst the rubble, however, Max and Dev sit huddled together; alive and unharmed. But more agents of The Rath arrive. They knock out Devan but then try to convince Max coming with them is the best way.

But Tobruk of The Fallen arrives and slays The Rath telling Max that they were trying to deceive him. Tobruk tells Max that it is his duty to protect Max because he is The Chosen One. Max can't believe what's happening.

John Lynch is being filled in by Agent Colby about Christie Blaze and her current situation. Lynch tells him that he helped start what calls "Operation Divine Right" and that he knows Blaze will search him out for help.

Retrieved from "https://heykidscomics.fandom.com/wiki/Divine_Right_Vol_1_2?oldid=1425008"
Community content is available under CC-BY-SA unless otherwise noted.