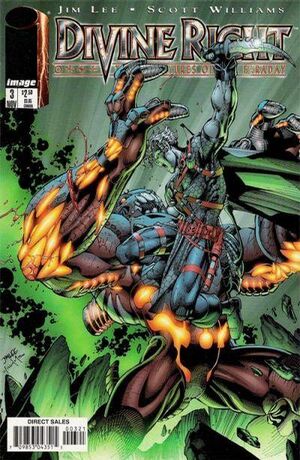 The name's Blaze -- the good fairy sent me.

Appearing in "Enemies of the State"Edit

Synopsis for "Enemies of the State"Edit

John Lynch monitors all the news reports coming in about the disturbances that have been caused by The Rath and their pursuit of Max Faraday. Caitlin Fairchild checks up on Lynch but startles him, causing him to draw his gun on her. Caitlin wants to know what's got Lynch so jumpy but he refuses to tell her. But she won't let up and pushes him to let her in on it. Since the rest of the Gen 13 team is off enjoying a well-deserved holiday break, she'd rather stay and help him. He reluctantly agrees.

Meanwhile, Tobruk holds off the hordes of The Rath while telling Max he must activate the power of The Creation Equation within himself if they are to survive the onslaught. But Max has no idea how to do it.

Max tries to tend to Devan but one The Rath pins down Max and prepares to extract his brain. But Brande, Exotica, and Christie Blaze arrive to help. Jesthra arrives with another Rath phalanx and unleashes Golath, a giant rock monster. But Brande is able to take down the monster as Max and Dev try to sneak away. Max mentions that he wishes he and Dev were home and instantly...

...Max and Dev are teleported to Max's apartment, much to their surprise. But they find that Max's apartment has been trashed and Max rushes in to see if his sister Jenny is okay. Jenny emerges with a pistol in hand and tells them she had to fight off a strange creature. Max and Dev realize it was one of The Rath. Just then, Lynch and Fairchild arrive at Max's door and introduce themselves to the trio.

In the Himalayan Mountains, a messenger delivers a message from the Coda Matriarch Helena to Cassandra, a Coda warrior. The messenger is killed by Cassandra and she tells her Coda sisters to prepare to carry out Helena's wishes.

Retrieved from "https://heykidscomics.fandom.com/wiki/Divine_Right_Vol_1_3?oldid=1425009"
Community content is available under CC-BY-SA unless otherwise noted.