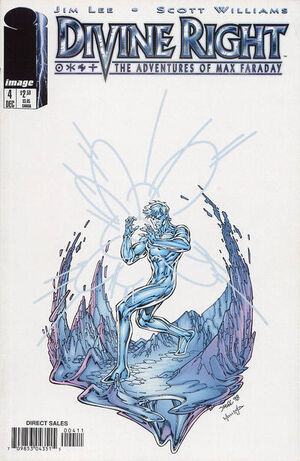 HEY! CUT THE HORSECRAP! That's enough you two! A wise dude once said -- what's done is done. That's Faraday's Law Number 88. Leave the past be, you two. I thought all you control freaks were here to help me! My life is completely screwed now 'cause of some stupid botched up secret operation! No home, no job, no ride, and pretty soon -- no girlfriend! You guys are forgetting a simple fact here. I'M THE ONE WITH THE POWER! And trust me -- I know how to use it!

Appearing in "The Love Connection"Edit

Synopsis for "The Love Connection"Edit

Tobruk, Brande, Exotica, and Christie Blaze arrive. Blaze and Lynch's reunion is anything but sweet as she punches him for abandoning her to I.O. Fairchild steps up to defend Lynch but The Fallen back up Blaze, reminding everyone that The Rath will attack again. Max gets fed-up with the bickering and his powers activate.

Exotica explains that each of The Fallen contain a fraction of the power Max possesses but it is also why they are charged with protecting him. It's their job to not only protect him but also make sure the power doesn't consume him.

Fairchild decides to take Max, Devan, and Jenny outside for a chance to cool off. She's tries to convince Max that Lynch's intentions are noble.

The Fallen discuss how best to protect Max and Brande discovers that the part of Creation Equation that Susanna has acts as a modulator for Max and without it, he could lose control.

Max returns and agrees to go with Lynch if Devan and Jenny can come too. But he tells them the first order of business is to get some food.

They raid the local Taco Hell and then head to St. Louis where Susanna lives. En route, Exotica begins teaching Max how to use his powers. They arrive to find Susanna missing and a Rath Bloodhound waiting for them! The Bloodhound tells them that Cardinal Lazarus has Susanna and he wants Max in exchange for her.

Cassandra has brought Susanna to Lazarus and he intents to use Susanna as bait to capture Max. Lazarus also reveals that their is a traitor amongst The Fallen.

At her home in McLean, Virginia, Dominique Faust receives word about an energy spike in St. Louis and makes preparations to investigate.

Retrieved from "https://heykidscomics.fandom.com/wiki/Divine_Right_Vol_1_4?oldid=1425010"
Community content is available under CC-BY-SA unless otherwise noted.