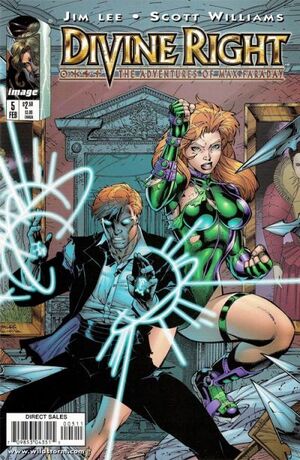 You call it corn; we call it maize. Either way, I'm not buying it.

Christie Blaze is in her Coda armor and infiltrates the residence of a Professor Senreich who apparently researched the Creation Equation. But Cassandra arrives and kills the Professor before Blaze can get to him. Cassandra questions Blaze's whereabouts as of late and then...

...Max wakes up in a safehouse near Georgetown. Max realizes he was dreaming of Blaze's past. Blaze doesn't believe him so Max gives her a rundown of her own life, telling her her knows that she was one of International Operations top agents but was denied entry into Team 7 because she was a woman, that Lynch had her go undercover as a Coda assassin to keep tabs on a woman named Dominique Faust who ran a renegade operation known as Black Arts which had ties to The Rath and the Coda, and finally how the Creation Equation which was downloaded into his brain is meant to control a powerful and ancient artifact called the Creation Wheel.

Meanwhile, Faust prepares for her annual Charity Gala and speaking her concerns into her private log about The Creation Equation being stolen and Lazarus' inability to capture Max Faraday. She also mentions that they've imprisoned Susanna in a place called The Hollow Realm. Outside, Lynch, Exotica, and Tobruk listen in on Faust.

Max, Jenny, and Devan don disguises and head to Faust's Gala. They make it deep into Faust's underground facilities where Max teleports the others in. They reach a gate which will lead them into The Hollow Realm. As the alarms sound, Max uses his powers to activate the gate. Everyone except Lynch and Fairchild go through the gate. Lynch waits until Faust sees it was him who disabled her gate. He smiles at her telling her, "Payback's a *****!" as he and Fairchild escape into a second gate.

Max and the others arrive in The Hollow Realm.