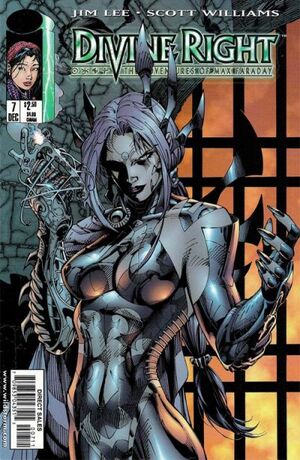 This is pathetic! YOU'RE A WOMAN DAMMIT! You should be out stealing men's hearts -- crushing their wills beneath your stilettos!

Captured by The Rath and under guard by the Coda assassin Cassandra, Susanna remembers how Max and her first met.

It was New Year's Eve and Max caught her online. Susanna was really lonely at the time and the two hit it off. They began their online relationship after that and stayed in touch.

Cassandra meanwhile, runs a painful scan on Susanna's mind to find out what she knows about Max Faraday and the Creation Equation. Susanna continues to get lost in her memories to block out the pain.

Max shares his picture with Susanna and she likes what she sees. Unfortunately, she decides not to share a picture with him yet. Max and her share a "date" where they simulatneously watch Susanna's favorite movie from their respective locations while online.

Cassandra grows tired of viewing Susanna's past and demands she tell her more about Max.

In the Hollow Realm, Max can feel Susanna's pain. His powers ignite and he becomes engraged. He tells everyone that he just found where Susanna is. The others are taken aback by Max's emerging power.

At I.O. headquarters, Lynch discusses with Lord Emp the dire ramifications if this whole situation is not taken care of soon.

Retrieved from "https://heykidscomics.fandom.com/wiki/Divine_Right_Vol_1_7?oldid=1425013"
Community content is available under CC-BY-SA unless otherwise noted.