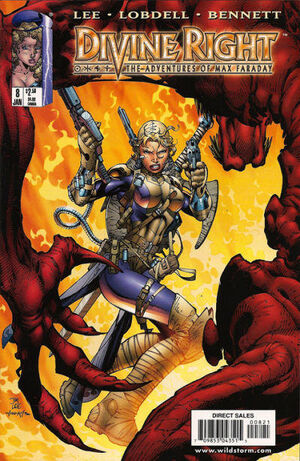 In that moment, when I had the chance... I should have killed Max Faraday. Not that he was a bad guy, he wasn't. Fact is, he was salt of the earth. A truly decent person. But he was also in the process of learning to wield the very power of creation. There's not a human being alive, with the exception of Jesus Christ, that could handle that responsibility and come away from it unchanged. Yes, I should have killed him...but I didn't. I couldn't.

Appearing in "Into the Hollow Realm"Edit

Synopsis for "Into the Hollow Realm"Edit

Christie Blaze stands before I.O.'s top leaders including Ivana Baiul. Lynch apparently turned himself in so Blaze could get an audience with them. He sits captured nearby, surrounded by guards. Blaze basically tells the entire story to them: The Creation Equation, The Creation Wheel, Cardinal Lazarus and The Rath, Max Faraday accidentally downloading it into his brain, Max sending part of it to his girlfriend Susanna, and Blaze's alliance with The Fallen in their attempt to get it back. But she also tells of how the power corrupted Max and in the end, he was almost as bad as Cardinal Lazarus himself.

Blaze recalls how Max started alienating everyone as the power started to engulf him. She even considered killing him at one point. They reach Tobruk's home-The Valley of the Eternal Light which is located deep within The Hollow Realm. Tobruk tells the citizens that Max is The Chosen One. They begin to worship him and Max accepts it without question. Devan and Jenny find this very disturbing.

Elsewhere in The Hollow Realm at Cardinal Lazarus' castle, Lazarus asks Cassandra if she has found the Creation Source Codes in Susanna yet. These codes act as a modulator to Max's power and can help him control the power. She hasn't and Lazarus tells her to kill Susanna and extract them from her brain. Just then, Jesthra arrives telling Lazarus that The Rath have found no trace of Max in The Hollow Realm. But suddenly Lazarus senses that Max is there. Jesthra asks if the traitor in Max's group can help them.

Brande continues to teach Max how to use his power. He is frustrated he can't yet control it enough to simply teleport Susanna to their location. Brande suggests he try teleporting to Susanna. Max tries it and for an instant, he is among Lazarus and his troops (much to their surprise).

But Max loses focus and teleports back. He tells them all that they're going after Susanna. But Lord Acheron and The Rath arrive and prepare to engage them in battle.

Retrieved from "https://heykidscomics.fandom.com/wiki/Divine_Right_Vol_1_8?oldid=1425014"
Community content is available under CC-BY-SA unless otherwise noted.