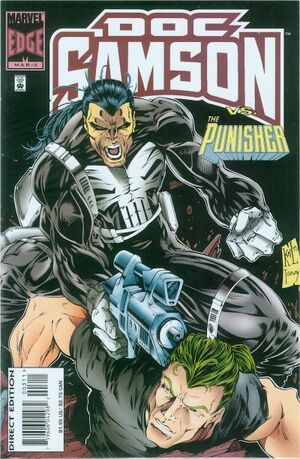 The world's only hunky green-haired shrink needs some time alone! He tries to score it at convicted killer Crazy Eight's grave, but winds up face-to-gun barrel with the Punisher! After a heated argument over capital punishment (remember, Doc helped send Frank to the chair), the Punisher offers to help the good doctor make a human quilt out of psycho-killer Patchwork, sewing with Detonator bullets instead of needles! Home Ec was never like this!

Retrieved from "https://heykidscomics.fandom.com/wiki/Doc_Samson_Vol_1_3?oldid=1423062"
Community content is available under CC-BY-SA unless otherwise noted.