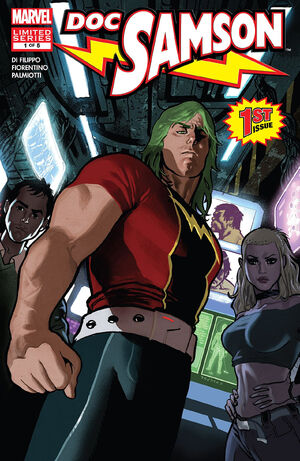 The story opens on a space station orbiting Earth. A skrull has subdued the stations crew (who are floating throughout the station), and the Skrull speaks via a secure connection to Nick Fury at SHIELD headquarters. The skrull has had some sort of psychotic break, saying he's been through so many faces, so many lies that he doesn't even know who he is anymore. After remarking on what a fruitcake the skrull was, he tells an underling to call their go-to guy....

Seconds later, Fury is explaining to Doc Samson that the skrull is threatening to drop the station's secret nuclear warheads on Earth. Samson, who sits in an office filled with various monitors which allow him to simultaneously keep tabs on Wolverine, the Thing, the Hulk, Iron Man, and a mundane support group, calmly tells Fury to patch the skrull through.

After calming him down a bit (and assuring him that no Kree are listening in), the skrull begins to open up about an upsetting dreams he's been having. No sooner does the skrull start talking than Tina Punnett interrupts, hacking into SHIELD's secure channel. (The skrull doesn't even notice Samson talking to someone else, and keeps going on about his dream.) Tina apologizes, saying she wouldn't normally interrupt her favorite godfather, except her parents had gone missing. Samson agrees to help, and wraps up the conversation just as the skrull inquires "what does it all mean, Leonard?" Samson assures him they can get to the root of his problem, and one hour and three minutes later, the skrull is being led away by SHIELD agents just in time for Eando to tell Samson of Tina's arrival.

Tina shows Samson the last video e-mails her parents had sent her, and also played an MP3 file of her last phone call with Officer Nighthorse, a local cop investigating the disappearance. Flora and Wolf Punnett make strange references to angry and restless spirits, and Officer Nighthorse reluctantly admit that the strange supernatural rumors are the closest thing they have to clues. When asked to explain what this all meant Tina tells him of when Flora and Wolf travelled with Cam Larson's band.

Larson was a singer and rising star when he died at the age of 26. In accordance with his last wishes (and against the wishes of his family and federal law), his bandmates snuck his body into Joshua Tree National Park and cremated it. Tina's parents loved Cam to much, however, to let his spirit depart this plane, and bound his ghost to the desert. "Three decades later, they're still pestering the poor guy."

Samson declares that this case is now his top priority, but while he feels capable of dealing with the physical aspects of the investigation, he may need some help on the supernatural aspects. To that end, Samson and Tina pay a visit to Stephen Strange's Sanctum Sanctorum. To Samson's surprise, they are not greeted by Strange's faithful companion Wong, but by Jack Holyoak. Jack claims to be Strange's newest apprentice, Jack tells them that Strange went into a trace three days ago, but foretold of their arrival and that he would awaken to meet them. Holyoak leads them to Strange's still dormant body, but then decides to attempt to wake him. Summoning the Sword of Surtur, Holyoak attempts to call back Strange's astral form. He does so, but also manages to turn Strange into a small (cloak and tunic-wearing) frog. When Jack fails to change him back, Samson resorts to a more archetypical solution, and has Tina kiss the frog.

Back in his human form, Strange chastises Holyoak, then asks Samson if he would consider taking Jack to aid him in his case. Strange assures him that Holyoak is quite gifted, though his impetuousness sometimes overwhelms his common sense. Reluctantly, Doc agrees.

The trio later arrive at Joshua Tree National Park (Samson having called in his new favor from a SHIELD helicopter to get them there). There they meet Officer Nighthorse, a local cop of Indian heritage. After a little poking around, Jack decides that he might be able to summon a nearby Psammead (sand elemental) who may have witnessed what happened. While Jack works his magic (accidentally summoning a set of large mushrooms and geyser), Nighthorse informs them that he doubt's they will find any physical evidence. The area, he explains, has been haunted for many years, even before Larson's cremation. Nighthorse goes on to tell a legend of the region (one that predates even his people): the legend of the living totem.

The legend tells of two young lovers, Whistle Pig and Sweet Grass, who were to be married as soon as Whistle Pig was able to provide for a family. Unfortunately, the tribe's shaman, Cold Winter, also desired Sweet Grass, and used a spell to force Whistle Pig's spirit out of his body and into a large, wooden totem pole. Unexpectedly, Whistle Pig's spirit animated the totem and slew Cold Winter. Driven insane by the terror of his own "death", the totem ran off and began several years of mad wandering. Eventually he arrived in what is now the park, where he was entombed by a band of vigilantes. There it remained for centuries, but now the rubble which supposedly covered its body had been displaced, and the totem is nowhere to be found.

As Nighthorse concludes his tale, Cam Larson's ghost appears, remarking that he thought he'd finally get some peace once he had the Punnett's hauled off. When Tina confronts him, he reveals that he was tired of the Punnett's pathetic sense of nostalga for the sixties, not to mention the fact that they prevented his spirit from moving on to the afterlife. When Samson inquires about the Living Totem, Cam reveals that he and the totem had been in communication for three decades. It took him ten just to teach him English, but after that he was the mad totem's best (and only) friend. When he tricked the Punnetts into thinking the pile of rubble covering his body was a hidden gateway to the Nexus of All Realities, they started digging, and eventually freed to the totem. The totem abducted them and hid them away until they could be persuaded to free him.

At that moment, the living totem arrives, and Cam orders him to attack. He quickly captures Tina, Jack, and Nighthorse. Samson is knoced out after a brief fight. When Doc awakes, the four have been reunited with the Punnetts, with the Totem and Cam watching from a short distance. Cam tells them he will release them if the Punnetts simply release his soul. Cam chastises the Punnetts for acting like spoiled children, and they ask for Cam's forgiveness. Flora burns the photo of Cam that had been used to anchor him to this plane, and Jack severed the "karmic threads" which kept him from transcendence.

Before Cam can leave this plane, Whistle Pig grows desperate at the thought of losing his only friend, and tries to absorb Cam's spirit into his wooden body. Samson tries to reason with him, telling him that there techniques, drugs, magic which could help him. The mention of magic only enrages the totem further.

Samson is able to determine that Whistle Pig's consciousness is distributed throughout his entire body. He believed that if he separated the pieces of the totem that he could treat each one individually, then reunite them into a single, sane whole. Samson splits the totem in two along a seam, then breaks the totem down through repetitive division. Cam's soul is able to move on, and the group buries the pieces as Samson separate them. Despite Whistle Pig's resistance to magical treatment, Doc feels he may stil need Holyoak to aid in his rehabilitation. Doc also agrees to let Tina stay with him for a while.

Epilogue
Somewhere in rural Maine, a young woman, seemingly hypnotized, is guided into a barn. The man guiding her remarks that he is envious of her: he recalls the first time he saw the master, and remarks that he wishes every time was the first. As a large, spiny, vaguely humanoid plant wraps his viny tendrils around her, the man guiding her remarks "of course, the ways in which each of us serves the Master differ greatly."

The Axis Mundi: In Wood, Neon and Flesh
An article by Professor Dorsey Huffnail (currently holder of the Josiah Carberry Chair with advanced degrees in Ethnobotany, Psychoceramics, Nuerolinguistics, Semiotics, Bio-engineering, Moletronics, and Musicology) on the Axis Mundi. According to Huffnail, the Axis Mundi is "the ethereal highway which links our earthly plain to both the higher and lower planes," with Yggdrasil, the World Tree being the most famous symbolic representation. Shamans derive much of their power from their ability to traverse the Axis Mundi, with good, benevolent shamans bringing back knowledge to help the tribe, and bad, selfish shamans using his connections only for personal gain. Ethnobotanist Terence McKenna believed that shamanistic trances put the shaman in touch with the underlying stratum of reality and its otherworldly inhabitants (which he calls "Hyperspace machine elves"), who dictate insights and revelations to the shaman. Another common symbolic form of the Axis Mundi is the totem pole, which can serve for mundane tasks (historical records, commemoratives to the dead, or to shame outcasts) as well as represent the Acis Mundi and the many guardians for each "celestial onramp". Another symbolic form is the common barber's pole, which moves simultaneously upwards and downwards. Anthropologist Jeremy Narby even claimed that the Axis Mundi is not an exterior construct, but is really contained within every individual. In their trances, the shamans descend to the molecular level within their own bodies to derive wisdom from their DNA, making every man, woman, and child his own or her own universe. "We have much to learn from these ancient practices."

Retrieved from "https://heykidscomics.fandom.com/wiki/Doc_Samson_Vol_2_1?oldid=1521237"
Community content is available under CC-BY-SA unless otherwise noted.