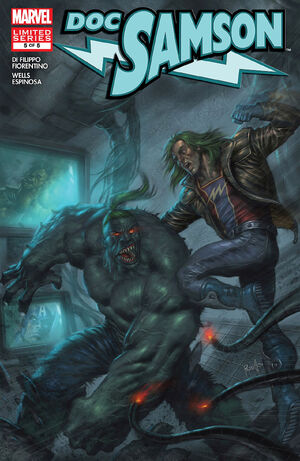 That'll do, Whistle Pig, that'll do.

Appearing in "The Adventures of Doc Samson, Adventure the Fourth: The Endless Nightmare of Leonard Samson, Part II"Edit

Synopsis for "The Adventures of Doc Samson, Adventure the Fourth: The Endless Nightmare of Leonard Samson, Part II"Edit

After the conquest of Earth-617 by Nightmare and his monsters, that dimension's Leonard Samson was forced by Nightmare to travel to Earth-616 (with the parasitic demon Energumen riding along to insure obedience). There, he must convince his counterpart to don the same dimension-breaching device (a machine originally designed to tap into the collective human unconscious) in order to open a passage into that world for Nightmare. With Doc Samson and his team in Las Vegas for the Consumer Electronics Show, Leonard Samson (617) first set about waylaying Doc's (616) assistants. Tina Punnett is now trapped in an all-too-real virtual reality game, while Whistle Pig and Jack Holyoak have somehow been sucked into a slot machine, leaving only Doc....

We find Doc at the blackjack tables, where (according to onlookers) he hasn't lost a hand in two hours. Confident that this is sufficient proof of his latest algorithms, and content to have enough money to build a new wing on Mount Sinai Hospital, Doc concludes with one final blackjack and takes his winnings. Energumen disguises Leonard Samson (617) as a large, slovenly man to get close without being recognized. Leonard comes up with the persona of "Lemmy Caution", an IRS agent concerned with assuring Doc lives up to his obligations to the federal government (i.e. pays his taxes). As Doc leads "Lemmy" up to his room, Leonard cannot help but be overwhelmed at how majestic his Earth-616 counterpart is.

Meanwhile, back in cyberspace (or more acurately, the game pod down in the Lectronix Arts booth on the showroom floor), Tina has been narrowly dodging dragon claws and flaming breath. Eventually finding sanctuary in a small cave (barely a crack in the rocks), Tina decides the only way out is to fall on her own sword. Sure enough, her in-game "death", while painful, resets the game pod and allows her to escape.

Up in Doc's hotel room, Leonard drops the "Lemmy Caution" disguise, and is immediately recognized by Doc as "himself". Leonard formally introduces himself (as "Doctor Leonard Samson, of another dimension") and apologizes for the ruse, saying it was a necessary deception. Leonard starts to tell Doc that he is in great trouble. Energumen's claws along his spine cause him to double over in pain, and immediately make him think better of it. Leonard plays off the fit as a side-effect of his narrow escape from his own dimension, which he admits was conquered by Nightmare.

At the same time, down in the casino, Tina searches for Jack and Whistle Pig. After following a tip from a waitress ("Believe me, Honey, you do't easily forget where you saw a giant walking, talking totem pole!"), Tina finds the machines the two had been near. A tiny voice catches her ear, and she immediately notices the faces of Jack and Whistle Pig where more normal cherries and bars should be. Tina's backpack registers radiation traces usually associated with teleportation devices, and reasons that the pair were decohered, then store as matrices within the machine instead of being re-assembled elsewhere. Tina completes the aborted transmission sequence, and the two materialize in front of her.

Again up in Doc's hotel room, Leonard continues his tale of half-truths, claiming that his device was all that allowed him to escape. Doc says he is familiar with the device, and had himself considered using a similar method to cure Banner. (He of course opted instead to try gamma ray absorption, which is ultimately why he is super-powered today). Leonard continues, saying Nightmare's creatures flooded his world, and speculates it was a magical experiment gone wrong. He recognized the creatures as being similar to those described by patients in dreams (or so he lies,) and so tried hooking himself up to the device alone. There he saw a rift, and passed through it into Earth-616. The two Samsons don the device's headsets, and Leonard activates the machine before Doc has time to object. Elsewhere in the hotel, Jack begins a series of memory-trace spells and astral searches to find the one behind their imprisonment. Tina suggests finding Doc, but Jack is convinced that this is all "some lame-duck villain trying to make his street cred by taking out three elite heroes with [their] outstanding reps." Jack eventually manages to scrye Leonard, and sees that he and Doc are together in his room.

In the collective human unconscious, Leonard Samson reverts to his Samson-Hulk form (with Energumen's reptillian face appearing Janus-like on the back of his head for good measure). As monsters begin to poor through the rift, Samson recognizes the threat, and pleads with Len to reconsider and reform. Len tells Doc not to hold his breath, and the demon-dogs attack. As Doc knocks the monsters out piles them up, Len eventually attacks hismself. The entire time Doc pleads with Len to reassert his humanity. Engraged, Len asks "How would that ever even begin to compare to you?" Jealous of his counterpart's majesty, heroic demeanor, fame, and charm, Len begins pummelling Doc until Doc summons up an image of their common ground: his parents. The two appareitions plead with Len, and this time he is more willing to listen. Back in the waking world, Doc's room is already filling with monsters by the time Tina, Jack, and Whislte Pig manage to bust the door down.

Eventually the ghosts of his parents win Len over, and he manages to rip Energumen from his body, reverting to his human form in the process. Leneord's penance comes too late, however, as Nightmare finally steps from the rift. Nightmare blasts Leonard with a shocking ray, sending him to the ground half unconscious, and unleashing Energumen. Nightmare offers Doc his counterpart's role as his lieutenant, and Energumen attempts to possess him. Using the last of his strength, Len grabs hold of Energumen's tail, pinning him down. Doc then kicks the small reptile into Nightare with such force that he is knocked back through the rift. Samson quickly grabs the portal by its edges, pulling the hole tight around Nightmare's shoulders. With a single punch Doc knocks the rest of Nightmare back through thr rift, sealing it. At the same time, Tina, Jack, and Whistle Pig finish off the last of the monsters and rush to pull the headsets off of the two Samsons. Doc comes around quickly, but Len does not appear to be so lucky.

Little Sadie Johnson sits in a large chair in Doc Samson's office, clutching her teddy bear tightly. Reluctantly, Sadie tells Doc about her dreams: dreams of running, being chased by a monster. "This dream is fairly common," Doc responds. "... You never see this monster, do you?"

"But I do, Doctor, That's the worst part... I see him all the time. He says he's going to get me one day when I'm awake...y'know, for real." Doc is in the middle of telling Sadie that monster's don't really exist when the Living Totem (Whistle Pig) interrupts looking for Sadie. As one can imagine, it does not go over well. After a chewing out by the girl's parents (and a threat of legal action), Doc demands to know what Whistle Pig thought he was doing. Whistle Pig explained that he only wanted to give her a dream catcher, which his people believed could ensnare the evil spirits which bring nightmares. Angrily, Doc dismisses Whistle Pig. "That'll do, Whistle Pig... That'll do!"

Later that night, Whistle Pig approaches the Johnson estate as quietly as a large, mobile totem pole may. He drops a dream catcher through Sadie's window and onto her bed, hoping it will in some small way apologize for scaring her. In Sadie's dream, she is being persued and tormented by monsters when Nightmare is suddenly jerked back and into the waking world. Believing Sadie had tried to use the dream catcher to lure him into her world (where he is weaker), he assures her that her fear will be more than enough to sustain him while he...

Nightmare's rant is interrupted by Whistle Pig's fist. As Whistle Pig beats Nightmare into a pulp (with him still ranting between each blow), Sadie goes quickly from terrified to hopeful, to amused. When she finally laughs at Nightmare, he loses the last of his power and disappears back into his Nightmare Realm. Whistle Pig apologizes for scaring the little girl and then retreats, sullen, into the night.

Days later, Whistle Pig is assisting Doc, but still moping when the Johnsons unexpectedly arrive. It seems Sadie has been sleeping like a baby, but won't stop talking about the helpful "Totem Man". Sadie asks if they can play together, and Whistle Pig looks to Doc for permission. Smiling this time, Doc responds "That'll do, Whistle Pig... That'll do."

Retrieved from "https://heykidscomics.fandom.com/wiki/Doc_Samson_Vol_2_5?oldid=1423068"
Community content is available under CC-BY-SA unless otherwise noted.