The Night of Brahma is a Doctor Fate storyline written by J.M. DeMatteis and illustrated by Shawn McManus. Following his successful miniseries on the character, it is the beginning of DeMatteis' Doctor Fate ongoing series. [[Nabu (New

The Night of Brahma 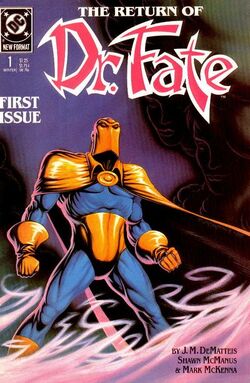 The Night of Brahma is a Doctor Fate storyline written by J.M. DeMatteis and illustrated by Shawn McManus. Following his successful miniseries on the character, it is the beginning of DeMatteis' Doctor Fate ongoing series. Nabu descends to Earth and inhabits the recently deceased body of Kent Nelson, acting as mentor to Eric and Linda Strauss as the new incarnation of Doctor Fate. Andrew Bennett also reappears, another DeMatteis character believed dead for several years after his final appearance in House of Mystery.

The storyline deals with Kali Yuga and the Lords of Order fighting the Lords of Chaos. It is prophecized that the reign of order will end in a reign of chaos, but after this there will be a mahapralaya and the universe will collapse in on itself. This "sleep of Brahma" will usher in a golden age of prosperity for the universe. The Lords of Order are trying to bring about this age of prosperity by ending the age of mankind, and Doctor Fate aligns with the Lords of Chaos to preserve humanity under their rule.

Eric and Linda Strauss merge together as Doctor Fate and take down a small-time conjuror named Joachim Hesse. Returning to their apartment, they find Nabu now inhabiting Kent Nelson's dead body and experimenting with alcohol in an effort to learn about being human. Eric and Linda argue about the difficulties of their relationship and maintaining Doctor Fate with two personalities. They're attacked by a small demon named Petey, but Nabu realizes he is good and befriends him to become their dog.[1]

The Lords of Order visit Nabu and tell him to end his efforts, as by fighting the inevitable chaos he is only delaying the end of Kali Yuga. Doctor Fate is challenged to battle their champion incarnated in next-door lawyer Jack C. Small, but refuses to fight. Andrew Bennett visits his old friend Master Shoju at the Temple of the Ineffable Tao. Bennett is trying to commit suicide, but his body reforms every time he does. The monks participate in a mass suicide at sunrise, but when Bennett survives he is visited by the Lords of Order.[2] Bennett is tasked by the Lords of Order to help bring about the end of Kali Yuga and the age of humanity, which he agrees to so he can finally die. Nabu sides with the Lords of Chaos to help save humanity, and Typhon becomes their newest ally. Jack Small is returned to his normal body, but becomes the human host for Typhon.[3] Bennett is sent to Eustania where he reclaims the Holy Grail from an ancient being named Azzarene. Fate, Nabu and Typhon follow him to Europe but Typhon's influence begins driving Eric insane. He has a mental breakdown and begins to hallucinate demons attacking him the way they did in Arkham Asylum, until Linda takes over their personality and saves him from the madness.[4] Nabu communes with the Chaos Lords while Fate continues to fight Typhon. Bennett drinks from the grail, purifying himself to become a vessel for Brahma. Fate, Nabu and Typhon hunt him down to a temple in India but are too late to stop him. He plays a flute, signifying the end of the world.[5] The world momentarily blinks out of existence. Fate and Bennett are left standing to witness the entirety of creation unfold in love and glory. Bennett changes his disposition, deciding not to end the world's beauty. Humanity is saved and the Lords of Order angrily object to his betrayal. Typhon declares victory for the Lords of Chaos and attacks Doctor Fate. They both grow to incredible sizes and have an epic battle, before Fate pulls Typhon out of Jack Small and flings him back into the Chaos Realm. Andrew Bennett plays his flute into the sunrise, knowing that either his death or next rebirth will be beautiful.[6]

Retrieved from "https://heykidscomics.fandom.com/wiki/Doctor_Fate:_The_Night_of_Brahma?oldid=1533741"
Community content is available under CC-BY-SA unless otherwise noted.