Start a Wiki
Part of the 'Vampiric Verses' story arc 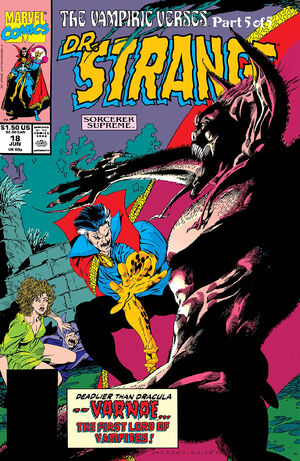 Appearing in "Blood Is Thicker..."Edit

Synopsis for "Blood Is Thicker..."Edit

"By the power vast which he who honors Oshtur wields -- By the Seraphim, which grant me sway o'er mystic shields -- By the scarcely harnessed might of dread Satannish -- Let now this thrice-cursed wall before us vanish."

"Sacred Vishanti -- you three who are one -- Though your book be inviolate, to be sundered by none -- Now bathe me in scorn -- Cascade me with curses -- But deilver to me -- The Vampiric Verses!"

"Eternal Vishanti -- I call you en toto -- Great Oshtur, Pale Hoggoth, Many-faced Agamotto -- Though none else might destroy it -- ye gods, I implore -- Let this page of your spellbook be on Earth -- nevermore!"

"Ere ocean-tossed Atlantis was lost, two hundred centuries gone -- grim wizards did pore o'er Darkhold lore of the primal demon, Chthon! -- Their perished foes as vampires rose, at the sorcerers' arcane word -- but the first on that stage was a dying mage -- one of their own dark horse! Now, by a Creole, who's traded soul for never-ending life -- be raised on high, against the sky -- this long-unbloodied knife -- and when 'tis pressed into mortal breast, so nigh a true vampire -- there'll rise instead, that first undead -- as human life does expire!"

Retrieved from "https://heykidscomics.fandom.com/wiki/Doctor_Strange,_Sorcerer_Supreme_Vol_1_18?oldid=1639930"
Community content is available under CC-BY-SA unless otherwise noted.