Start a Wiki
Part of the 'Siege of Darkness' event 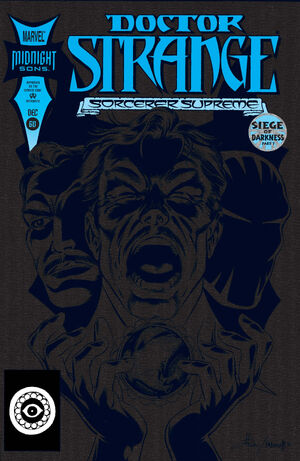 I see you must be forced to hear me -- this is now guerrilla warfare -- there is no sanctuary. Witness, however, my friends...some times to wrest victory from apparent disaster, one must force the devastation -- to completion!

Doc and the Midnight Son's are besieged at Doc's Sanctum. When Doc tries to freeze time, Lilith interferes and splits him into three entities. Sister Nil kills Imei and Doc has to destroy his own Sanctum!

Retrieved from "https://heykidscomics.fandom.com/wiki/Doctor_Strange,_Sorcerer_Supreme_Vol_1_60?oldid=1423238"
Community content is available under CC-BY-SA unless otherwise noted.