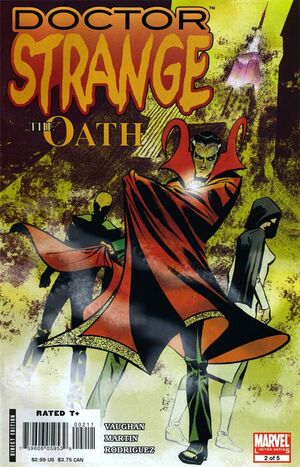 Appearing in "The Oath Chapter Two"Edit

Synopsis for "The Oath Chapter Two"Edit

An unknown figure in an elaborate laboratory tests the stolen Otkid's Elixir and realizes its properties. Shocked, he calls an emergency meeting with the "Overlords."

Doctor Strange and Wong leave Night Nurse's infirmary, but the Nurse insists on coming along, citing Strange's recent trauma and Wong's tumor-related dizzy spells. Strange's destination is the lab of Dr. Jonas Hilt, the man to whom he sent a sample of Otkid's Elixir for testing. Hilt is Strange's one sympathetic friend from his medical days. But when they enter, they find the lab ravaged, the sample stolen, and Hilt murdered by the same gun which injured Strange. Enraged, Doctor Strange calls upon the Eye of Agamotto to reveal the killer's trail and finds someone else using magic to cover his tracks. He recognizes the work of a fellow student of the Ancient One and immediately assumes it is Baron Mordo.

Brigand's hideout is concealed in the middle of the Harlem River. They enter (with a little lockpicking by Night Nurse) and are beset by security droids. Then Brigand himself catches the Nurse and puts his gun to her head.

Retrieved from "https://heykidscomics.fandom.com/wiki/Doctor_Strange:_The_Oath_Vol_1_2?oldid=1423270"
Community content is available under CC-BY-SA unless otherwise noted.