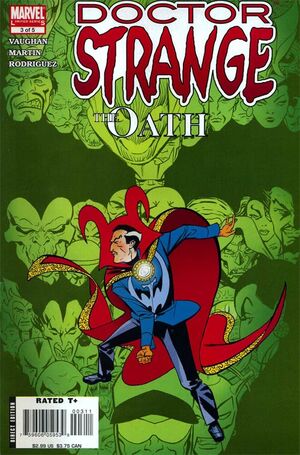 Appearing in "The Oath Chapter Three"Edit

Synopsis for "The Oath Chapter Three"Edit

Flashback to 1963: A stricken patient congratulates Dr. Nicodemus West, the man who operated on Stephen Strange after his accident, for his good work in ending Strange's career. It transpires that the man is one of the cases Strange turned away. Though West insists he would never have cost the world a surgeon of Strange's skill, the patient has nothing to cling to but his spite and a hope for a cure from arcane means.

Present day: Strange and Wong dare not move with Brigand holding a gun to Night Nurse's head. But the Nurse is resourceful and gets clear; Wong and Strange disable Brigand and Strange puts him to sleep while he enters the man's mind. Within Brigand's head, he encounters Nightmare, then Dormammu, then a veritable crowd of his enemies, but he isn't deceived by these illusions. Eventually Brigand reveals his employer: Nicodemus West.

West is meeting with his "Overlords" -- the board of directors of Timely Pharmaceuticals. They tell him coldly that the Elixir must be destroyed and everyone who knows of it must be killed. Their reasoning is that the world is not ready to have a magical cure for every disease handed to them. West counters that they seem more concerned that a magical potion like Otkid's Elixir would put Timely out of business. They reply that West must resort to magic himself to end their problem, or else they will reveal his dirty little secret to the world.

Strange returns from Brigand's mind, but both he and Wong are weakening. He drops the unconscious assassin into his own mind and they return to the Night Nurse's infirmary. The Nurse knows Nicodemus West as the CEO of Timely, but none of them knew about any magical connection. Then they round the corner to see the clinic in flames.

Retrieved from "https://heykidscomics.fandom.com/wiki/Doctor_Strange:_The_Oath_Vol_1_3?oldid=1423271"
Community content is available under CC-BY-SA unless otherwise noted.