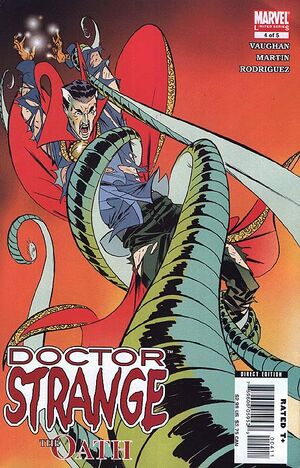 Appearing in "The Oath Chapter Four"Edit

Synopsis for "The Oath Chapter Four"Edit

The Night Nurse's infirmary is under attack from a tentacled beast: the Marrakant Hellguard. Doctor Strange orders Wong to get himself and the Nurse away while he engages the creature.

Ignoring the command, Wong tells the Nurse to hide while he goes to his master's aid. In the air, Strange looses a powerful magic bolt which merely bounces off the creature's hide. It catches and devours his Cloak of Levitation and the Eye of Agamotto, sending him falling several stories. Wong runs to his side but is immediately swept up by one of the creature's tentacles; Night Nurse, trying to defend her patients, is similarly caught. Strange reaches into his pocket and produces Hitler's handgun, stolen from Brigand. His unsteady hands make his aim unreliable, but he manages to slay the demon with a single shot.

The Cloak and Eye emerge from the body of Strange's dead foe, and no sooner is he re-equipped than he sets out to follow the trail of summoning back to its source. Wong and the Nurse insist on coming along.

West, observing events in a mirror, is less than pleased to see Strange appear in his secret chamber within Timely Pharmaceuticals. But he surprises the sorcerer by casting a spell in his own right, encircling the trio in a ball of magical restraints. West explains that his inability to save Strange's hands had wracked him with guilt, and that he eventually left the practice to find Strange and try to fix his mistakes. The path led him to the Ancient One, who reluctantly agreed to teach him magic.

West remained with the Ancient One only a few months, departing when he had learned enough of magic to heal. But when a botched attempt killed a patient, two representatives of Timely offered to cover for him if he agreed to stop curing people with his magic. At the end of this recitation, Wong has another fainting fit and Strange has heard enough: he effortlessly breaks out of the spell and slams West into his own mirror, demanding the return of Otkid's Elixir. West retorts that Strange cannot see the disastrous effects a potion that could cure all diseases could cause. He frees himself with a magic bolt and injures Strange, but the sorcerer has worse to worry about: Wong has died.

Retrieved from "https://heykidscomics.fandom.com/wiki/Doctor_Strange:_The_Oath_Vol_1_4?oldid=1423272"
Community content is available under CC-BY-SA unless otherwise noted.