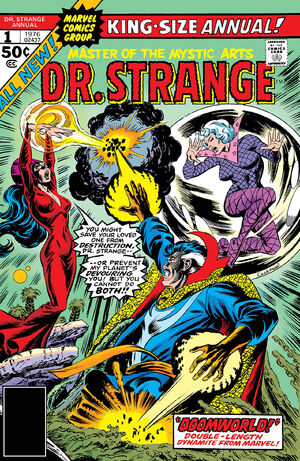 Appearing in "... And There Will Be Worlds Anew!"Edit

Synopsis for "... And There Will Be Worlds Anew!"Edit

While searching for Clea's whereabouts, Dr. Strange is contacted by the Ancient One and asked to go to the Temple of Man to seek out the Book of Knowledge. Traveling there, Strange finds that the Temple's priests have been murdered. Finding the lone survivor, he learns that the book has been taken to the realm known as Phaseworld.

Strange travels to Phaseworld and becomes embroiled in a conflict between Lectra, her sister Phaydra and the angel Tempus. During the battle Lectra threatens to end the life of Clea, however, it is revealed that Phaydra never abducted her at all. The imprisoned Clea was only an illusion, as was The Ancient One who summoned Dr. Strange in the first place. Phaydra confesses that she cast these illusions in order to lure Dr. Strange into her realm, so she could be loved by him. Upset that her true motives have been discovered, she destroys the Soul-Mirror, the one object that keeps Phaseworld together. In the realm's death-throws, Dr. Strange escapes, floating back to Earth.

Retrieved from "https://heykidscomics.fandom.com/wiki/Doctor_Strange_Annual_Vol_1_1?oldid=1423780"
Community content is available under CC-BY-SA unless otherwise noted.