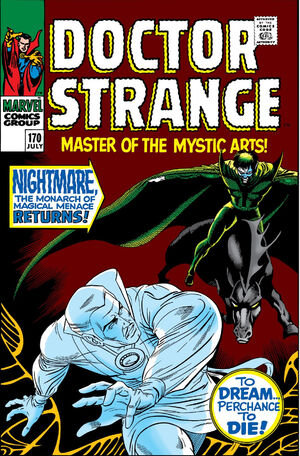 Nightmare!? That phantom fiend who stalks the misty byways of dreams? Could he have come back -- to menace us anew?

Appearing in "To Dream-- Perchance to Die!"Edit

Synopsis for "To Dream-- Perchance to Die!"Edit

Strange hears the Ancient One cry out in his sleep and rushes to his chamber. He is in some kind of coma. Hamir, the Ancient One's manservant, heard him say, "Nightmare." An arousal spell fails, so Strange tries to enter his dreaming mind. Before he can complete his preparations, he is pulled forcibly into the Ancient One's nightmare. Hamir drops his disguise--he is really Nightmare, and he follows Strange.

Nightmare's first spell, a set of emerald bands, is broken. His second forces Strange to revert from astral form to physical. His steed attacks, but Strange drives it off with the light of his All-Seeing Eye. Nightmare's third spell brings Hamir forth as a hostage, but the Eye reveals it as an illusion. Frustrated, Nightmare returns to the waking world to kill the Ancient One physically. Strange's cloak restrains him, and he flees to his own dimension.

The Ancient One finally awakens. He confesses that he deliberately set a trap for Nightmare, using himself as bait, so that Strange would defeat him and regain his confidence.

Retrieved from "https://heykidscomics.fandom.com/wiki/Doctor_Strange_Vol_1_170?oldid=1719651"
Community content is available under CC-BY-SA unless otherwise noted.