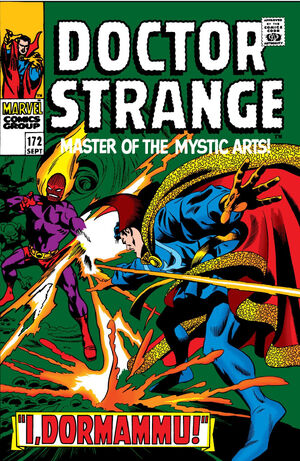 ... 'Tis I who now stand ready to snuff out the brief candle of your worthless life... I Dormammu!

Revealing himself to his opponent, Dormammu adds Dr. Strange to his collection of prisoners. Dormammu then explains that when all thought he was destroyed battling Eternity, he was really transported to the Nameless Realm where he took control and plotted his revenge after Clea had appeared in that realm and he took her prisoner. With his enemies imprisoned, Dormammu leaves a demon to guard over them while he deals with more pressing matters. Freeing himself from his mystical confinement, Dr. Strange battles the guardian, killing it with the Eye of Agamotto. Freeing Clea and Victoria, and after a brief reunion with Clea, Dr. Strange sends both women back to Earth while he goes to deal with Dormammu. Summoning Umar to show her that he still lives, Dormammu then leads an army of Dykkors to the Doorway of the Dimensions; however, when they arrive there, they find that Dr. Strange is the only force barring their path.

Retrieved from "https://heykidscomics.fandom.com/wiki/Doctor_Strange_Vol_1_172?oldid=1719653"
Community content is available under CC-BY-SA unless otherwise noted.