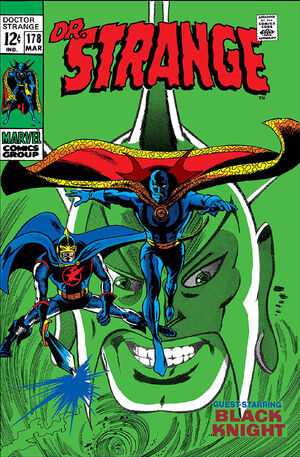 Beyond reckoning are the follies and foibles of humankind, my son... and, most perplexing of all is their eternal lusting after power unrestrained!

Appearing in "... With One Beside Him"Edit

Synopsis for "... With One Beside Him"Edit

Having learned that the remaining members of the Sons of Satannish were banished to the realm of Tiboro, and are the only possible means of learning how to reverse the spell cast by their masters, Dr. Strange tavels to England to recruit his friend Victoria Bentley to help, however upon arriving there he gets into a brief battle with the Black Knight. Strange decides that the Knight would be better suited for this mission and so recruits him to travel to Tiboro's realm.

There the two heroes battle Tiboro, and it is a losing battle until the Black Knight is able to smash Tiboro's magic wand the source of the beings powers. Defeaeted, Tiboro allows Strange and the Knight to take the Sons of Satannish back with them to Earth's dimension. This story is continued in Avengers #61

Retrieved from "https://heykidscomics.fandom.com/wiki/Doctor_Strange_Vol_1_178?oldid=1719659"
Community content is available under CC-BY-SA unless otherwise noted.