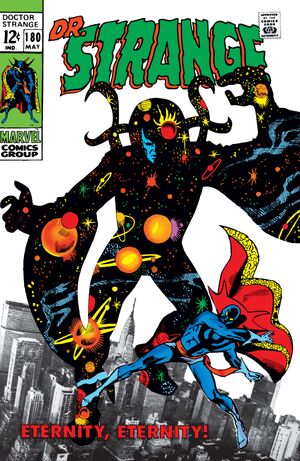 Good evening Stephen! I'm ready for what you call ... our date!

Dr. Strange has a dream of Eternity, who tells him that he survived his battle against Dormammu, however when Strange approached, Eternity changes into Nightmare. Awakening from the dream, Wong informs Strange that it's New Years Eve. Taking Clea out to Times Square to count down to the New Year, things get weird when the clock strikes 12.

As the New Year passess, dinosaurs, barbarians and other beings from other times start appearing in Times Square and attack the crowd, prompting Dr. Strange to dawn his sorcerers guise, publicly revealing his true nature. Fighting these threats, Nightmare suddenly appears with Eternity as his prisoner. Nightmare challenges Dr. Strange, who naturally accepts, and Nightmare forewarns him that one misttep will lead to the death.

Appearing in "Doctor Strange: Master of the Mystic Arts"Edit

Synopsis for "Doctor Strange: Master of the Mystic Arts"Edit

A one page pin-up

Retrieved from "https://heykidscomics.fandom.com/wiki/Doctor_Strange_Vol_1_180?oldid=1719661"
Community content is available under CC-BY-SA unless otherwise noted.