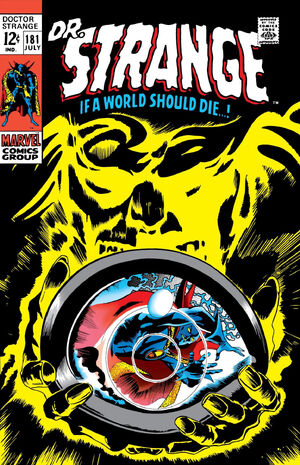 In a thousand dimensions, Clea ... the one constant is the creature called woman!

Appearing in "If a World Should Die Before I Wake..."Edit

Synopsis for "If a World Should Die Before I Wake..."Edit

Accepting Nightmare's challenge, Dr. Strange returns to his Sanctum where he prepares to enter the Dream World. There he is attacked by all manner of creatures as Clea and Wong watch through the Orb of Agamotto from Earth. Dr. Strange succeeds in defeating all the monsters that Nightmare sets against him, however when Strange confronts his old foe once more, he uses the Eye of Agamotto. However, this proves to be his undoing, as this time Nightmare has prepared for such an attack: He takes control over the Eye and redirect its power on Strange, knocking him out, leaving Nightmare to boast about the pending dissolution of the barrier between their respective realms.

Retrieved from "https://heykidscomics.fandom.com/wiki/Doctor_Strange_Vol_1_181?oldid=1719662"
Community content is available under CC-BY-SA unless otherwise noted.