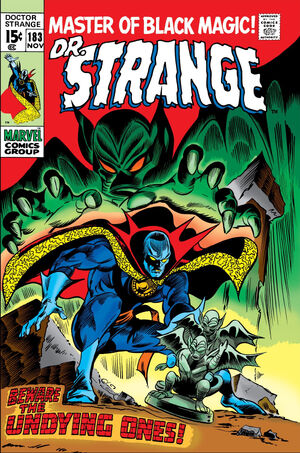 The shadows, my love... the shadows always surround us! Can we not leave this house... this life... and make our own bright world?

Appearing in "They Walk by Night!"Edit

Synopsis for "They Walk by Night!"Edit

One night when Dr. Strange receives a telegram asking for help from an old associate named Kenneth Ward, he is perplexed to see that it is addressed to "Stephen Sanders", investigating he realizes that Eternity had changed reality so that Stephen's name was different, in order to protect his secret identity of Sorcerer Supreme.

Traveling to Kenneth's home, Stephen is shocked to find that Kenneth now has hired staff. Visiting his weak friend, Strange learns that while Kenneth was exploring the Himilayian mountain range, he found an idol of the Undying Ones and that he's been haunted and ill ever since. Realizing the "hired help" are really demons under the employ of the ancient ones, Strange battles them and eventually kills them by exposing them to sun light. However, the effort is too little too late, as Kenneth dies during the battle. However, Stephen vows to stop the Undying One's evil from polluting the earthly realm.

Retrieved from "https://heykidscomics.fandom.com/wiki/Doctor_Strange_Vol_1_183?oldid=1494871"
Community content is available under CC-BY-SA unless otherwise noted.