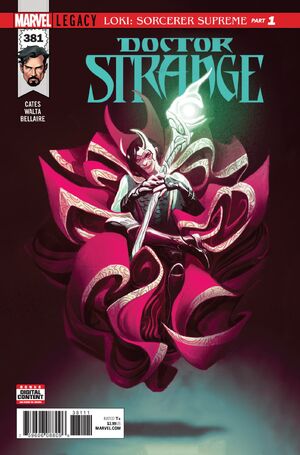 Evil is everywhere and the world needs the Sorcerer Supreme more than ever. But is the world ready for LOKI: SORCERER SUPREME? He has the cloak, the spells — he’s even got Zelma Stanton as his assistant (and possibly more?) — but is this the chance he needed to become a hero, or is the god of lies dangerously close to unlimited power? And what happened to STEPHEN STRANGE? PLUS: Includes 3 bonus MARVEL PRIMER PAGES!

Retrieved from "https://heykidscomics.fandom.com/wiki/Doctor_Strange_Vol_1_381?oldid=1652661"
Community content is available under CC-BY-SA unless otherwise noted.