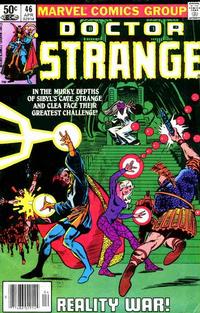 Appearing in "The Reality War"Edit

Synopsis for "The Reality War"Edit

Synopsis for "A Moment's Peace"Edit

Staying in a villa just south of Rome, Clea attempts to get Stephen to enjoy a moonlit dip in the ocean, however Stephen declines. Reflecting on his past as a disciple of the Ancient One, Strange decides to test Clea's abilities. After she succeeds in deflecting a mystic attack, Stephen takes her hand and tells her that it's time to once again resume their training.

Retrieved from "https://heykidscomics.fandom.com/wiki/Doctor_Strange_Vol_2_46?oldid=1659065"
Community content is available under CC-BY-SA unless otherwise noted.