Start a Wiki
Part of the 'All-New, All-Different Marvel' event 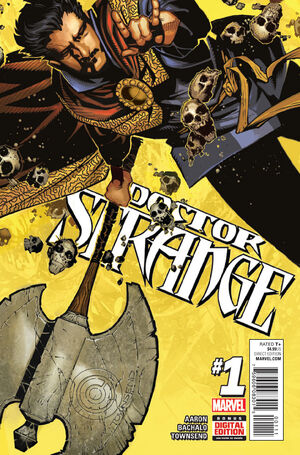 Appearing in "The Way of the Weird"Edit

Who do you call when things are coming put of your dreams and trying to kill you? Or when your daughter is cursing in Latin and walking like a spider? Or when your dog keeps screaming at you to strangle your neighbors? Doctor Strange, of course. He's the only people standing between us and the forces of darkness, but has he been paying his tab? Every act of magic has a cost and Jason Aaron (THOR, ORIGINAL SIN) and Chris Bachalo (UNCANNY X-MEN) are going to put Stephen Strange through hell to even the scales.

Appearing in "The Coming Slaughter"Edit

Synopsis for "The Coming Slaughter"Edit

Retrieved from "https://heykidscomics.fandom.com/wiki/Doctor_Strange_Vol_4_1?oldid=1652470"
Community content is available under CC-BY-SA unless otherwise noted.