Part of the 'Blood in the Aether' story arc 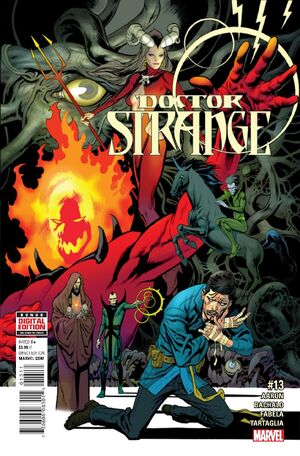 Appearing in "Blood in the Aether - Chapter Two: Night of Four Billion Nightmares"Edit

“BLOOD IN THE AETHER” STARTS NOW!

Doctor Strange is on the brink of death, his magic nearly depleted. Sensing the Sorcerer Supreme at his weakest, his greatest foes will return from the shadows, ready to strike. Behold the return Doctor Strange’s classic rogues gallery starting with... BARON MORDO!

Retrieved from "https://heykidscomics.fandom.com/wiki/Doctor_Strange_Vol_4_13?oldid=1652497"
Community content is available under CC-BY-SA unless otherwise noted.