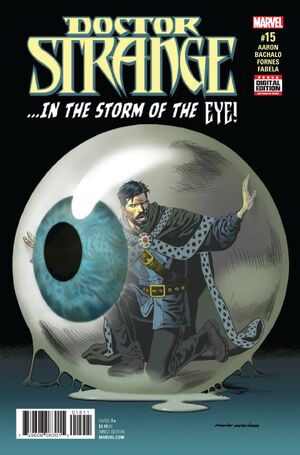 Appearing in "Blood in the Aether - Chapter Four: The Face of Sin"Edit

• “Blood in the Aether” continues as Doctor Strange’s Rogues’ Gallery all take their shot at a weakened Sorcerer Supreme!

• Back during ORIGINAL SIN, the Watcher was killed and his eyes were removed. One eye fell into the hands of the Orb!

• With that immense power, the Orb has set his sights on Doctor Strange!

Retrieved from "https://heykidscomics.fandom.com/wiki/Doctor_Strange_Vol_4_15?oldid=1652499"
Community content is available under CC-BY-SA unless otherwise noted.