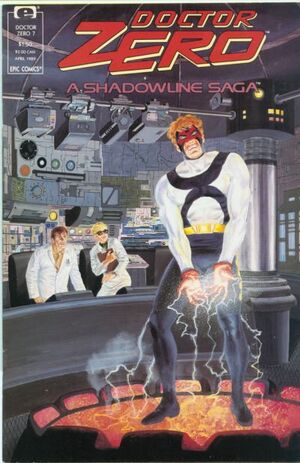 There are truths you never believe until they confront you -- the morals you hear in fairy tales as a child, the hidden truths you study in college as myths. Sometimes, in those tales and myths, the dark gods let you leave the forest. Sometimes they give you boons or gifts. They never forget those favors they grant you... And though they never ask for anything in return then -- Sometimes they come back.

Appearing in "Man Is But a Dream of a Shadow"Edit

Doctor Zero is a prisoner of the US government's Military Response and Covert Techniques Squadron. At least, that's what the "MERCHANTS" think. But the truth is something far more frightening.

Retrieved from "https://heykidscomics.fandom.com/wiki/Doctor_Zero_Vol_1_7?oldid=720585"
Community content is available under CC-BY-SA unless otherwise noted.