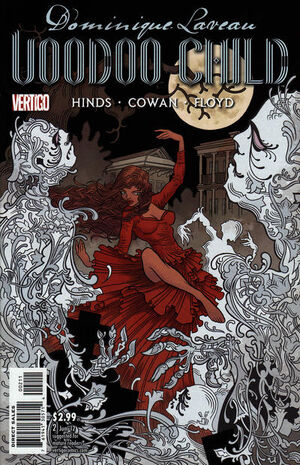 We right in the middle of some more of that crazy, my lady.

Appearing in "Requiem, Chapter Two: A Haunting in the Old Town"Edit

Synopsis for "Requiem, Chapter Two: A Haunting in the Old Town"Edit

Years ago, there were three beautiful girls. Serafine was the elder granddaughter of Marie Laveau, the Voodoo Queen. She was burdened with the loneliness that comes with responsibility. Her younger sister was Loreli, an impulsive girl. Their cousin Giselle Durand often acted as mediator between the two.

As they grew older, the girls became pillars of the Voodoo Court. This entailed becoming entrenched in a battle between two powerful Loa - Voodoo gods - who were vying for the affections and loyalties of Marie and her descendants. Though they were required to remain neutral, Loreli soon fell in love with Kalfu - the dark aspect of the god of the crossroads. This angered Serafine, who knew the wrath of Ogun - god of iron and the hunt - would not be far behind. When Loreli died giving birth to a daughter by Kalfu, Serafine ordered Giselle to dispose of it. Instead, Giselle raised the girl as her own.

That girl grew to be Dominique Laveau, who now stands over her adoptive mother's corpse, having fallen victim to Ogun's Witch Hunter. The swordsman prepares to slice Dominique's head from her body, but a mysterious figure pulls her away, and into another world.

Elsewhere, in New Orleans' Louie Armstrong Park, the werewolf that had been tracking Dominique returns to the home of Chancellor Malenfant, who is struggling to act as mediator between Jacqueline Laveau - heir to Serafine - and Mr. Roberts, who is his contact with the oil companies. Jacqueline is a devout of Ogun, and wants Dominique dead, so that she can claim her right as Queen of the Voodoo Court. Roberts has used his money to hire local gang members to kill Dominique, but Jacqueline sees little value in his mundane methods, when she could call on Ogun himself. Just then, Phillip, the werewolf, arrives and angrily questions Roberts' effectiveness. With little hesitation, he tears Roberts' head from his body. Malenfant warns that this move was ill-advised, but Jacqueline comforts Phillip and takes him away to have his wounds looked at.

Turning, Dominique demands to know who her saviour is. The tall man explains that he is a spirit of sorts, but that his name is Black Benny, and he was once the greatest drummer that New Orleans had ever seen. He has pulled her into something he calls the Ghostland, where the spirits of those who have been killed in New Orleans stay until they can pass on. He has saved her because she is in fact a direct descendent of the last great Voodoo Queen, Marie Laveau. However, they cannot pause, because Ogun will soon send his hunters for them. They must hurry to Saint Louis Cemetery, in the hopes that Marie Laveau's spirit will protect them.

The hunters chase Dominique and Benny to the cemetery, where Marie agrees to give Dominique help. Ogun arrives and Marie holds him back, and he agrees for now, to let her pass back into reality. Unfortunately, this means returning to the room with the murderous witch hunter. Benny gives Dominique a set of words to say to the witch hunter, which he hopes will save her life.

When Dominique reappears in reality, she utters the words, and the witch hunter is given pause. Suddenly, Allan bursts in and opens fire on him, forcing the witch hunter to escape through the window. As she rushes to Allan's arms, Dominique explains that she is caught in the middle of something bizarre.

Retrieved from "https://heykidscomics.fandom.com/wiki/Dominique_Laveau:_Voodoo_Child_Vol_1_2?oldid=1423359"
Community content is available under CC-BY-SA unless otherwise noted.