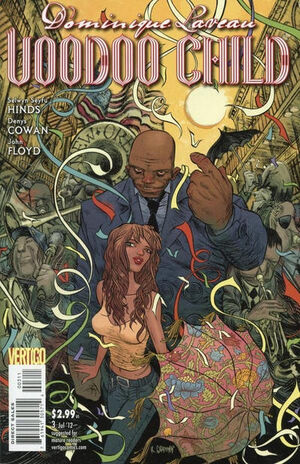 No, Benny. I'm not running anymore... I'm going to face whatever it is.

Suddenly under attack by werewolves, Dominique Laveau and her boyfriend Detective Allan Ecevedo are sure that they will be torn to shreds, until the very man that Allan had chased away appears and kills the creatures.

Earlier, Allan had been giving Dominique cover fire, as the Dooney Boys gang had targeted her for some reason. He managed to fend them off until she had escaped and backup had arrived, but when he cornered one of the gang members for questioning, the thug bit down on a suicide capsule and was killed. Worried about her, Allan had waited outside Dominique's aunt Giselle's place, in case she went there.

The witch hunter explains that the acidic gas grenades he used on the werewolves contained accelerated silver nitric cores, making them especially effective against loup garous.

Elsewhere, on Bourbon Street, Chancellor Malenfant watches a young boy pick someone's pocket as he speaks with someone on the phone who offers him an alternative suggestion to killing Jacqueline Laveau's rival for Queen of the Voodoo Court.

The witch hunter introduces himself as St. Claire, and leads them away from the house, attempting to cover their scent from more wolves. Despite the fact that he killed the only mother Dominique ever had, he seems intent to help her. Even so, Dominique promises that the next time they meet, she will try to make him feel the way he made her feel. She and Allan then escape in a car.

At a DEA stash pad, Allan gives Dominique a place to stay and some clothes to wear. She is still horrified by her aunt's death, and the blood is still on her hands. Allan has to stop her from trying to rub it off, lest she tear her skin away. That night, she and Allan make love.

Elsewhere, Jacqueline and Phillip also make love, but something leaves Jacqueline less satisfied than her cousin. Finished, Phillip becomes restless and decides to go out and kill something. Jacqueline goes to the washroom and inspects her face, only to fine a straight razor at her throat in the shadows. The assailant holds a phone to her ear, and a threatening voice warns her that she should not have allowed her lover to kill Mr. Roberts. She realizes that the voice is Primo. The voice warns that he worked with Jacqueline's mother, not for her, as the razor drags across her throat, drawing blood. She is left shaken, but alive.

Dominique looks into her washroom mirror and calls on Black Benny. He appears, and agrees at her request to tell her what's going on. He explains that in the year 1862, the Loa gods Kalfu and Ogun were at war. Marie Laveau had only just become Voodoo Queen before she was dragged into that war. She went above the warring gods' heads to Baron Samedi and Erzulie and caused them to force peace, for reality's sake. Out of that meeting was born the first Voodoo Court. Eventually, though, Kalfu and Dominique's mother Loreli coupled. Though Loreli died birthing her, Dominique is the truest heir to the role of Voodoo Queen.

Benny suddenly senses an evil presence. Rather than run, Dominique decides to face it. She finds that Jacqueline has captured Allan. St. Claire is there, and he whispers to Dominique that others must hear the truth about who she is, or she will not survive the night. This is clear enough from Jacqueline's obvious intent to kill her. Chancellor Malenfant appears, and warns that Dominique must not be killed at this time.

Suddenly, Lord Ogun himself is manifest, and he demands attention. He blames Dominique for her aunt Serafine's death. Malenfant steps in, and suggests that it is possible that Dominique is not the guilty party after all. Though she is the seed of Kalfu, killing her would have grave consequences among the other Loa, if she is not to blame. It would be even worse if she was killed, and the truly responsible one was allowed to commit further crimes unnoticed.

Elsewhere, the young thief that Malenfant saw returns to his sister, under the Interstate 10 overpass. They are both hungry, but he promises he will use the money he stole to buy them some food tomorrow.

Despite Malenfant's words, Ogun will not allow Dominique to go her own way. Instead, she must face the trial of trials.

Retrieved from "https://heykidscomics.fandom.com/wiki/Dominique_Laveau:_Voodoo_Child_Vol_1_3?oldid=1423354"
Community content is available under CC-BY-SA unless otherwise noted.