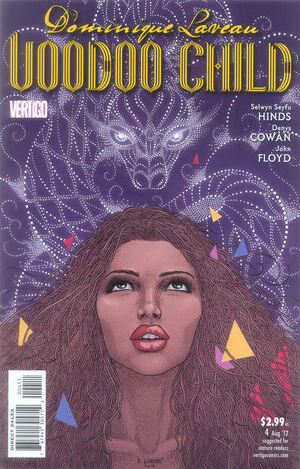 Say I go through with it, then what? Could I help her? That little girl?

Appearing in "Requiem, Chapter Four: Of Trails and Crossroads"Edit

Synopsis for "Requiem, Chapter Four: Of Trails and Crossroads"Edit

Under New Orleans' Interstate 10, Tasha and Tayshawn have been struggling to survive since they lost their parents in Hurricane Katrina. They, like many others, have set up camp underneath the overpass in the four months since their city was flooded. Tasha has been having dreams of flying, lately. She is beginning to worry about their prospects of survival, though. These worries are worsened by the appearance of a group of thugs who are after Tayshawn for protection money. Tayshawn glares at their leader, and inexplicably, they leave, offering just one more day of leniency.

Meanwhile, Dominique Laveau has been made to face the so-called Trial of Trials by Ogun of the Loa. She emerges in a surreal landscape, greeted by a much older man carrying a heavy sack. He introduces himself as Papa Legba, guardian of the Crossroads and a member of the Loa. He explains that this is a place of testing and measure. Dominique counters that he has no right to judge her, but he responds that things are not so simple, and hopes that she will forgive them eventually.

Dominique suddenly finds herself in another place; in the domain of Erzulie, the female aspect of Legba and goddess of dreams, hopes, love, and endless sorrow. Dominique dreams od one day marrying Allan Ecevedo. She has hope that her city wil one day recover. But Dominique also fears her fate as Voodoo Queen; as queen of blood. St. Claire could be her lover or her killer, depending on her decision. Erzulie turns to Dominique and warns that the course of her life has changed irreversibly. She asks whether Dominique will be able to bear it. All Dominique can manage to say is that she doesn't know. Erzulie takes this as Dominique's answer, and the girl is returned to the Crossroads.

Not long after arriving, she is transported away to a boat in a black river. The boat is being navigated by Baron Samedi, the Loa of sex, death, healing and resurrection. He attempts to convince her to have sex with him, but she recoils. Nonchalantly, he moves on to the trial. He wonders what weight Dominique's desire holds for her. He offers her the chance to speak to her dead mothers; her aunt Giselle and her real mother Loreli. In exchange for the answers to her questions, she must have sex with him. In her heart, she refuses, and she is instantly back at the Crossroads.

Angrily, Dominique demands to know whether Legba knew what Samedi would ask of her. Again, he sends her away without a chance for respite. Dominique finds herself in the middle of Tasha's dream. The little girl is flying, until she suddenly begins falling. Dominique catches her and explains that whenever she had a bad dream as a girl, she would close her eyes and think of somewhere better. The girl can't think of anywhere, so Dominique thinks of her own. She takes them back to her memory of school. She was a quiet girl, then. She didn't fit in at school, but she got along well with her aunt. She would stay deep inside herself, and watch the world go by. That would take all of her fear away.

Slowly, Tasha opens her eyes, and they are flying again. Dominique suggests that they go somewhere that Tasha feels happy. Tasha warns that all of her happy memories turn bad, after a while. Dominique promises that she will not leave her, and Tasha agrees. She takes them back to a time when her father would come home and give she and her brother a Twix bar. They would each get one of the two sticks of chocolate. The dream sours when it shifts to a time when her father came home angry, and threatened to beat her mother up. Dominique promises to keep holding Tasha's hand, but she suddenly feels as though she's being pulled away again.

Dominique is angry with Legba for taking her away from that poor girl, knowing what Tasha will face in her dream. Legba explains that the short time she spent with Tasha was enough to demonstrate her capacity for compassion, and that was all that was necessary. She demands to know why they are testing her. Finally, Legba explains that Damballah, the god of life and equilibrium is the snake upon which all life struggles to ride steadily. Few are like Dominique, though; a child of both the human and divine. There will be a day when she either fixes them all more firmly to Damballah's back, or she knocks them all off.

Legba turns to Dominique and asks, finally, whether she will see this series of events through to their conclusion, despite the danger. Dominique wonders if she would have the power to help people; to help Tasha. Legba responds that she could help everyone. Bravely, Dominique agrees to do it, unaware that Legba has deceived her again.

Legba is visited by Kalfu, the god of mischief, injustice, and black magic - and Dominique's father. He is not pleased to know that the other Loa attempted to hide the trials from him, and he warns that what follows is part of no trial. Dominique has chosen her fate, and now she must face the consequences of that choice alone.

Elsewhere, Tasha wakes, and cries to her brother that the pretty lady she saw in her dreams is in big trouble.

Dominique finds herself in front of Marinette, the mother of werewolves, the goddess of freedom through blood, and the sorcerer's handmaiden. Marinette warns that she and her children are most displeased with her.

Retrieved from "https://heykidscomics.fandom.com/wiki/Dominique_Laveau:_Voodoo_Child_Vol_1_4?oldid=1423349"
Community content is available under CC-BY-SA unless otherwise noted.