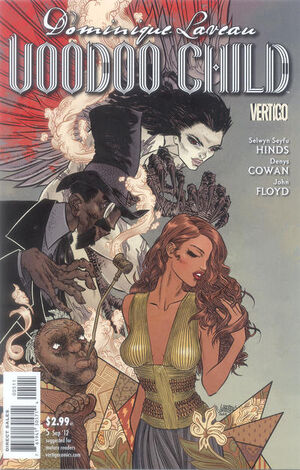 You don't need to be concerned. I have my own reasons now for seeing this through.

Appearing in "Requiem, Chapter Five: God Save the Queen"Edit

Synopsis for "Requiem, Chapter Five: God Save the Queen"Edit

Knowing that their home under the overpass in New Orleans is no longer safe for them, Tayshawn takes his younger sister Tasha out onto the road in search of somewhere they can stay. They pass by an older man that Tasha recognizes from a dream. He introduces himself as "Papa," and offers to share a story with them if they will let him walk with them for a time. Tayshawn is suspicious at first, but Tasha's wide smile convinces him to give the old man a chance.

Papa begins the story of a journey. Long ago at the end of the 18th Century, Saint-Domingue was the home of a french colony where the natives were treated as slaves. Those slaves called upon their old gods to give them the strength to revolt. A woman was possessed by the Iron god of war Ogun, who spoke the names of those who would lead the revolution. That woman is said to have become the goddess Marinette, herself. In the midst of the ensuing revolution, a young couple of slaves bore a son into the world.

Years later, that boy grew older, and he witnessed a great battle where his own father was killed by French soldiers. The god Kalfu took pity and gave the boy a pendant with power waiting to be unlocked. A few years later that boy had grown to become a child soldier, lending a hand where he could. Eventually, though, and at great cost, the Haitian natives won their freedom. They celebrated, but the price paid for the island's victory would prove high.

The boy joined the great Haitian migration, and landed in New Orleans harbour in 1809. He knew when he saw the place that his destiny lay there. Eventually, he would meet and love a young creole lady named Marie. His name was Jacques Laveau.

Elsewhere, Dominique Laveau, a descendant of Marie and Jacques, and now heiress to the role of Voodoo Queen, faces an angry Marinette at the Crossroads. Her father, the dark god Kalfu intervenes on her behalf, explaining that he intends no harm to Marinette; he wishes only to protect his own. Marinette is unsatisfied and attacks Dominique, who accesses her powers to such an extent that the great snake Damballah wakes.

Damballah sends Dominique back to her own dreams, and away from Marinette. There, she reunites with her spirit friend Black Benny. He explains that she has indeed survived the trials of the Loas, and she is now the true Voodoo Queen. Her real body is unconscious in a safe house, watched over by the trustworthy Chancellor Malenfant. The others of the Voodoo Court are not trustworthy, but Dominique must wake and face them all the same.

As soon as Dominique wakes, she asks after her boyfriend Allan Ecevedo. Malenfant explains that the policeman is fine, but he thought it best for Dominique to recuperate in isolation in preparation for her formal investiture as Queen. Though Dominique shows little interest in becoming the Voodoo Queen, Malenfant warns that the effect of having gained her powers now will be dangerous for her without someone to help her through it. Likewise, the Court plays a vital role in New Orleans, and with Dominique's guidance, they can do much good for it. Lastly, if Dominique is not responsible for the recent massacre, then there is still a threat out there with the power to confuse Ogun's sight. Regardless of all this, Dominique does have her own reasons to go through with it.

Malenfant offers a final word of warning, pointing out that Black Benny is known to him, and that the others must not find out about him. Also, the powers that she has must be kept discreet, because the gifts of Kalfu always have consequences.

Malenfant leaves Dominique with St. Claire, who provides her with a dress to wear. The two of them then ride through the Bayou. She asks him about witch-hunting, and he explains that he is a human imbued with special weapons and skills in combat arts that are meant to help protect the Voodoo Queen and follow her orders. Hearing this, Dominique commands that he help her find the two Katrina orphans Tayshawn and Tasha that she saw during the trials.

Suddenly, Dominique spots a young child's body floating in the swamp and stops the boat to reach for it. Within moment,s they are attacked by a hoard of Vampires. St. Claire holds Dominique back as he fires his weapons into the fray, killing many of them. Still he fails to kill the matriarch. The vampiress stands over them, complaining that the vampires need not have died, as they were just doing her bidding. She states that she and her kind will die so long as the Voodoo Queen lives, and so Dominique must be eliminated. The matriarch attacks, and Dominique grabs the wounded St. Claire's gun and shoots her in the head.

Afterwards, Dominique is presented before the remainder of the Court for her investiture. Her cousin Jacqueline and the werewolf Phillip X are required to acknowledge her, but Phillip resists. Dominique prevents St. Claire from killing him, trying to explain that she did not kill his father, and that she understands his feelings. If he is unconvinced by her show of empathy, she warns that she could kill him herself without much effort. Grumpily, Phillip walks away without acknowledging her. Jacqueline, who was going to be the next Voodoo Queen before Dominique surfaced, feels as though her destiny has been stolen from her. Dominique explains that if her cousin knew the full extent of the sacrifice involved, she would thank her for taking that responsibility from her.

Finally, Malenfant places Allan before Dominique, and explains that the man is under a compliance charm, because outsiders cannot know of the Court. As such, Allan must either die for the greater good, or his memories must be excised. Unfortunately, if the latter is chosen, his memories of Dominique herself must be erased permanently as well. Malenfant expresses his regret, explaining that in order to erase his memories, Dominique will have to kiss him with genuine intent.

Dominique promises that she will find a way to fix what she is about to do, and that she will always love him. Then, she presses her lips to his.

With that done, the stone pendant passed down from Kalfu to Jacques and Marie is placed around Dominiques neck. Papa Legba thinks on this, and wonders if the power that now circles her neck will prove to be a shackle or a key.

Retrieved from "https://heykidscomics.fandom.com/wiki/Dominique_Laveau:_Voodoo_Child_Vol_1_5?oldid=1423344"
Community content is available under CC-BY-SA unless otherwise noted.