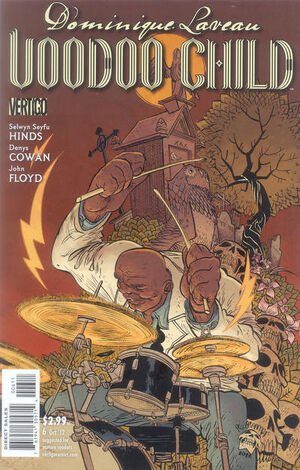 So what have we learned, eh? There is a thin line between death, betrayal and fucky-fuck... And you play games with Samedi at your peril.

Appearing in "A Bitter Blues for Brother Benny"Edit

Synopsis for "A Bitter Blues for Brother Benny"Edit

A pair of boys break into a New Orleans graveyard to perform a voodoo ritual. The boy in charge has his friend film everything while he says the words, calling on Baron Samedi. Surprisingly, the loa of death appears, searching for some kind of offering for him. He finds a bottle of beer, and drinks of it, offering to give the boys a story in return.

In 1905, Black Benny was a boxer gifted with a quick tongue, quick fists, and was even quicker with a pair of drum sticks. He was undefeated at boxing, and well worth betting on, until the day that he accidentally killed a man in the ring - a friend of his.

Benny went to the man's grave and met with the widow, attempting to make his apologies. She was too stricken by grief, and knew that he could not possibly know how she felt. So, she cursed him, warning that he would meet death soon.

Samedi agreed to help Benny if he would do something in exchange. He would have to send a message to Samedi's wife, who had barred him from entering her domain. Without any more instruction than that, he sent Benny off.

Benny found himself crossing a narrow and crumbling stone bridge, which soon filled with skeletons wearing boxing gloves. Benny punched his way through them all, and made his way across. He then found himself at the seat behind a kit of drums. A skeleton danced while he played, dancing until it fell into a chasm of flames. Benny had won the challenge and gained access to Samedi's wife.

The woman introduced herself as Maman Brigitte, and he delivered the message that Samedi was sorry for all of his dalliances. Despite her anger, she forgave him. Aftwerwards, she seduced Benny, and they had sex.

Benny returned to Samedi, and the way was opened. Samedi ate the death shadow following Benny, but he in doing so, he discovered that Benny had had sex with his wife. Benny warned that Brigitte had promised to close the way and return to Ireland if Samedi took his anger out on her lover. Impishly, Samedi allowed Benny to leave, but he would belong to Samedi as soon as he died.

As a solution for Benny's plight, Ms. Laveau decided to let Benny bind his soul to her own, so as to keep it from Samedi. It wasn't long, however, before Benny was killed by a horse and carriage.

Samedi explains to the boys that the moral of his story is that there is a thin line between death, betrayal, and sex, and one plays games with Samedi at one's peril. The boys realize that he means them harm, and claim that they are protected by the circle they drew. He reminds them that they are in the circle with him. He captures their souls in his bottle of beer, and walks on his way.

Retrieved from "https://heykidscomics.fandom.com/wiki/Dominique_Laveau:_Voodoo_Child_Vol_1_6?oldid=1423338"
Community content is available under CC-BY-SA unless otherwise noted.