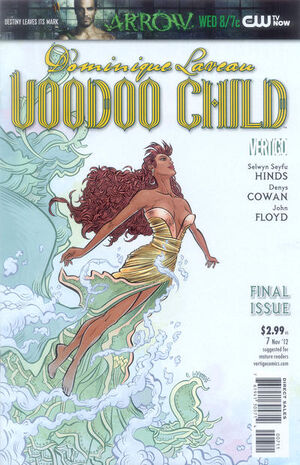 We've a traitor hidden among us for six years -- a traitor who made a pact with a terrible enemy, and caused the massacre of this court six years ago.

In 2012, Dominique Laveau, the Queen of the New Orleans Voodoo Court lay dying in the arms of young Tasha. When Dominique became the Voodoo Queen, Tasha had been just a little girl, trying to survive after Hurricane Katrina ruined most of her city.

Not long after becoming the Voodoo Queen, Dominique had been filled with guilt over having to erase her boyfriend Allan's memory of her, in order to save his life. Her sadness was interrupted suddenly when Baron Samedi appeared on her bed, bleeding and dying.

In the meantime, Dominique's cousin Jacqueline and the influential Primo quietly conspired against her, wanting power. However, they were not yet ready to make a move, and it wouldn't be for a while yet, that Dominique would know whether or not it was they who would come to slaughter the court.

Dominique and St. Claire the witch hunter went to the River of Souls to investigate how Baron Samedi could have been injured so deeply within his own domain. Something there had driven the dead insane, and were it not for Papa Legba, they would not have survived the attack themselves. All that remained after the dead had gone were traces of the entity, and the two children Tasha and her brother Tayshawn.

Over the next six years, attacks continued from this strange entity. Dominique did her best to fight them off, and in the meantime, she raised Tasha and Tayshawn, finding hope within their growth. The Loa explained that their enemy was the antithesis of faith. While the Loa's power depended on faith, this enemy drew power from a lack of it. Someone within the court was acting as an anchor for that lack of faith. Dominique tried to draw that anchor out using any means she could.

Finally, Dominique discovered the traitor in her midst, and called the court together to identify them. Using the remains she found of the traitor at the River of Souls six years ago, she cast a spell which would cause those remains to seek out their own. The black remains swept across the room and surrounded Jacqueline, proving that it was she who conspired to kill several of the court's members. Unable to contain her rage, Jacqueline cast a dark spell, forcing Dominique to protect her allies.

Afterwards, Jacqueline stood alone, on one side of the room, surrounded by the dead bodies of those who were not under Dominique's protection. She tried to make her escape, and angrily, Tayshawn followed her, refusing to let her simply get away with her crimes.

Suddenly, Lord Ogun appeared, but Dominique correctly deduced that this was not Ogun, and never had been. It was the antithesis of faith, the one for whom Jacqueline played anchor. St. Claire got Tasha to safety, while Dominique confronted her enemy. The Loa had retreated into Dominique's spirit, as she was the last bastion of Voodoo faith, and the enemy thought that he had the advantage. He was wrong, however. Dominique unleashed the full power of the Loa within her, and they dispelled the antithesis of faith.

Unfortunately, that action left Dominique weak. She had St. Claire try to go after Jacqueline and retrieve Tayshawn, while Tasha sat by her side.

Near death, Dominique enters the Ghostland, where Black Benny waited. She offers him a choice: move on to the afterlife, or stay around to help train the next Voodoo Queen - Tasha. Soon, Kalfu comes for his daughter, urging her to give up her mortal shell. As she passes on, she promises Tasha that she will see her again.

Retrieved from "https://heykidscomics.fandom.com/wiki/Dominique_Laveau:_Voodoo_Child_Vol_1_7?oldid=1423332"
Community content is available under CC-BY-SA unless otherwise noted.