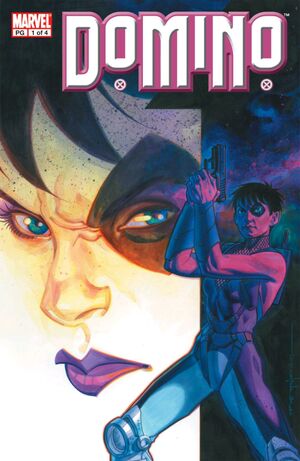 You better have something worthwhile to show me or I'm going to get my two hours back in ways you're not going to enjoy.

Domino travels to Hong Kong and engages in one of her first freelance mercenary jobs in years. She scales the side of a skyscraper and bursts into a penthouse office. Men in dark suits and sunglasses scramble into the room, but Domino wades through them with little effort. She quickly finds the object of her mission objective and darts back out the window.

A week later, she meets with her client, a crippled man named Jonathan Shepherd. Jonathan commends Domino on her ability to smuggle an infectious organism out of Hong Kong, but criticizes her reckless methods. He gives her the agreed upon payment, which consists of nothing more than an airplane ticket and a photograph. Domino believes the picture may be a photograph of her mother.

A few days later, she travels to Atlanta, Georgia where she consults with a master computer hacker. The two meet at Centennial Park in the middle of the city. The hacker has analyzed Domino's photograph, but concludes that her mother doesn't exist. Suddenly, an attack helicopter descends upon them and begins spraying the area with bullets. The hacker falls over dead, and Domino back flips behind a column for better cover. She removes her watch and activates a timer, which she then throws at the helicopter. The device explodes beneath the vehicle completely shredding it. Domino walks away curious how this surprise attack relates to her search for her mother.

Retrieved from "https://heykidscomics.fandom.com/wiki/Domino_Vol_2_1?oldid=1431799"
Community content is available under CC-BY-SA unless otherwise noted.