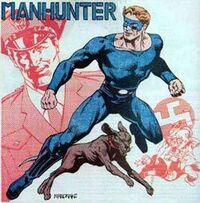 Donald "Dan" Richards attended the police academy with his girlfriend's brother, Jim, who was at the top of the class, while Dan was at the very bottom. After Jim was framed for a crime he didn't commit, Dan took up the identity of Manhunter to track down the actual killer. He caught the perpetrator and cleared Jim's name. Afterwards, however, he continued to operate as Manhunter. His sidekick was a dog named Thor. Dan's granddaughter, Marcie Cooper, became the third Harlequin after he convinced her to join the Manhunters.

Dan Richards was later killed by Mark Shaw, who had fallen back into his Dumas persona.