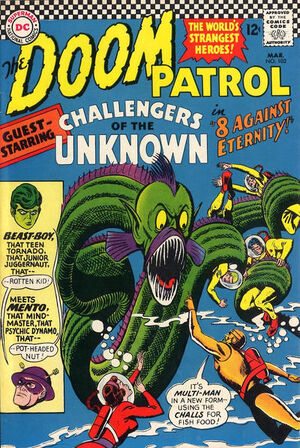 I won't marry you - but I will kiss you! With a giant hand!

While Robotman makes a guest appearance at the Mercy Hospital carnival, Rita Farr spends the afternoon with Steve Dayton. Dayton tries once again to cajole Rita into marrying him, but she rebuffs his advances with an extra-large hand slap to the face.

Meanwhile, Larry Trainor test flies a new experimental jet, similar in design to the craft he had flown when he first became Negative Man. While flying sorties, Larry notices a rocket ship malfunctioning on its landing pad. He sends N-Man out to lend assistance and the energy being increases in size so that it can keep the ship grounded without harming the crew.

Before long, the Chief recalls all of them back to Doom Patrol Headquarters in Midway City. When they arrive, they find the adventurers known as the Challengers of the Unknown waiting for them. They inform the Patrol that Multi-Man and his League of Challenger Haters have been drilling in the undersea ruins of an ancient site located not far from fabled Atlantis. The two teams decide to work together to bring Multi-Man down once and for all.

Multi-Man and his cronies discover the perfectly preserved bodies of many ancient warriors trapped beneath the hardened magma of an undersea volcano. His fellow Challenger-hater, Kra uses his alien wizardry to bring the warriors back to life. Taking control of his new personal army, Multi-Man forces the ancient warriors to wage war against the nations of Earth on his behalf.

The Doom Patrol and the Challengers locate the coordinates of the hidden city and travel there via Rocket-Foil to fight Multi-Man and the League. Robotman disassembles Kra's robotic parts, while Elasti-Girl has a rematch with Multi-Woman. Negative Man and the Challengers trail the warriors as they embark upon a campaign in Japorta. Beast Boy and Mento arrive to lend a hand and ably take down Multi-Man and Volcano Man.

After the villains are defeated, the ancient ruins of the undersea city collapse inward upon themselves forever burying a civilization that should have died three-thousand years ago.

Retrieved from "https://heykidscomics.fandom.com/wiki/Doom_Patrol_Vol_1_102?oldid=1424206"
Community content is available under CC-BY-SA unless otherwise noted.