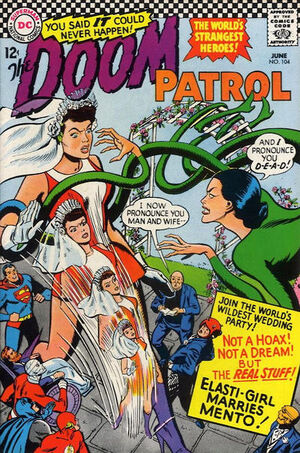 Appearing in "The Bride of the Doom Patrol"Edit

Synopsis for "The Bride of the Doom Patrol"Edit

After much soul-searching, Elasti-Girl finally agrees to marry Mento. She changes her mind, however, after a foiled ploy by Negative Man and Robotman to spoil the wedding proves to her how much her life with the Doom Patrol means to her. A heartsick Mento meanwhile consoles himself by redesigning his psychokinetic helmet and costume. Shortly thereafter, Mento appears to attack the Doom Patrol and to cause Rita to be temporarily blinded. An angry Robotman then retaliates by wrecking Steve Dayton's mansion. Actually, both sides are being victimized by the Brotherhood of Evil, whose shape-changing member, Madame Rouge, had impersonated Mento in his "attack" on the Doom Patrol members.

The Chief discovers their ruse in time to prevent an all-out war between Mento and the Patrol, but a recovered Elasti-Girl unwittingly spoils his plan to lure the Brotherhood into a trap. The heroes are on the edge of defeat when the Chief comes to the rescue in his Action Chair. The Brotherhood and Garguax retreat from a regrouped Doom Patrol, and Elasti-Girl accepts a new proposal from Mento. The wedding takes place at last a few hours later, with members of both the Justice League and the Teen Titans in attendance.

Retrieved from "https://heykidscomics.fandom.com/wiki/Doom_Patrol_Vol_1_104?oldid=1504605"
Community content is available under CC-BY-SA unless otherwise noted.