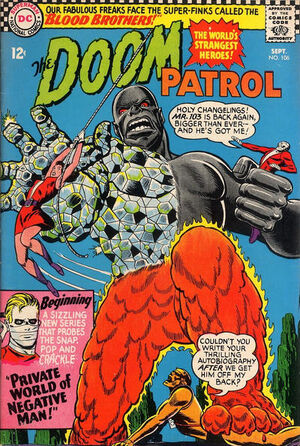 Suspecting their involvement with his young ward, Galtry finances the experiments of Mr. 103 in return for his promised destruction of the Doom Patrol. The Patrol is on the verge of being defeated by the atomic villain when Mento, searching for his missing wife, intervenes to turn the battle in the heroes' favor.

Having ingested the meteoric element he stole,[1] Mr. 103 is now invulnerable to the Chief's ray-weapon, but a side-effect traps him in a highly radioactive form, and he is almost destroyed before the Chief discovers a way to save his life.

Reneging on his promise to surrender if he were saved, Mr. 103 escapes, but not before the Doom Patrol learns of his involvement with Galtry. This information leads Steve Dayton to instigate an investigation of Galtry's finances.

Appearing in "The Private Life of Negative Man"Edit

Synopsis for "The Private Life of Negative Man"Edit

Retells the origin of Negative Man, including how the Chief developed a bandage, spun from a plastic of his own invention, capable of blocking radiation so that Larry can live among men again. Sadly, he is still shunned, now for his freakish appearance.

Coming upon a police cordon, he learns there is a girl locked in the trunk of one of 200 cars with a time bomb. Using Neg Man to search all of the cars in an instant, he locates the girl. Using a large hammer, he frees her from the trunk. But, upon removing her blindfold, she flees in terror at the sight of him. Despondent, Larry believes he has no future.

Retrieved from "https://heykidscomics.fandom.com/wiki/Doom_Patrol_Vol_1_106?oldid=1424210"
Community content is available under CC-BY-SA unless otherwise noted.