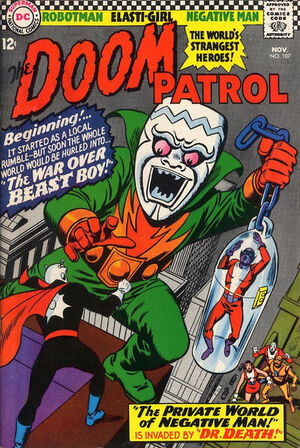 Appearing in "The War Over Beast Boy"Edit

Synopsis for "The War Over Beast Boy"Edit

When the Doom Patrol battles Ultimax, a gigantic mobile computer, its shrinking-gas weapon reduces Elasti-Girl to apparent nothingness. She finds herself a captive on a sub-atomic world, where she is condemned to death as a spy by the inhabitants. Meanwhile, Mento continues his financial battle against Galtry's associates only to be thwarted by Abu Hallam, a mysterious masked banking mogul.

Appearing in "The Race Against Dr. Death"Edit

Synopsis for "The Race Against Dr. Death"Edit

Part of continuing series called The Private Life of Negative Man: Now living in a room in his mother's boarding house, Larry looks for work -- normal work. Visiting a "Dr. Drew" who wants to use Larry's power and his own genius, Larry rebuffs him, refusing to "exploit my strange power! I'm gonna lead a normal life using normal human talents!". Drew knows that, when Larry is crushed in his search, he will return.

Larry is offered a job, dependent on his powers, not his abilities as a pilot. His old company offers to put him on a pension, but he refuses. Returning to Dr. Drew, whom Larry secretly refers to as "Doctor Death", he is tested as Negative Man between two electrical arcs, ostensibly for protecting the Earth from alien invaders. Larry discovers they are really to destroy the planet. Death temporarily traps Larry in a lead lined room, but he escapes and finds and destroys the full-scale transmitters that Death would use to blackmail the world.

Retrieved from "https://heykidscomics.fandom.com/wiki/Doom_Patrol_Vol_1_107?oldid=1424211"
Community content is available under CC-BY-SA unless otherwise noted.