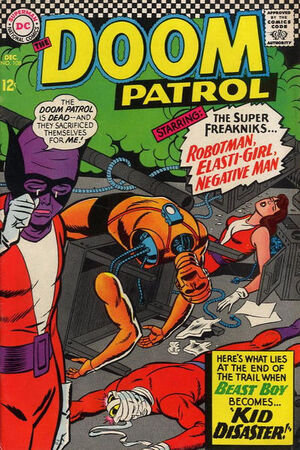 The king of the micro-world falls in love with Elasti-Girl and defends her against his own subjects. In the nick of time, Mento, using the reducing gas which has been duplicated by the Chief, arrives to return her to Earth. Then Robotman and Negative Man fight a return match against Ultimax, who is revealed as the Brain in a robotic disguise, and who captures them with the aid of Garguax. At the same time, Mento is overcome by Abu Hallam, who is unmasked as M. Mallah, and Elasti-Girl is defeated by Madame Rouge. The Brotherhood of Evil sends a closed-circuit broadcast message to the Chief, alerting him to the capture of the team, and he sends Beast Boy to find them. When Beast Boy arrives, however, all four heroes appear to be dead.

Retrieved from "https://heykidscomics.fandom.com/wiki/Doom_Patrol_Vol_1_108?oldid=1424212"
Community content is available under CC-BY-SA unless otherwise noted.