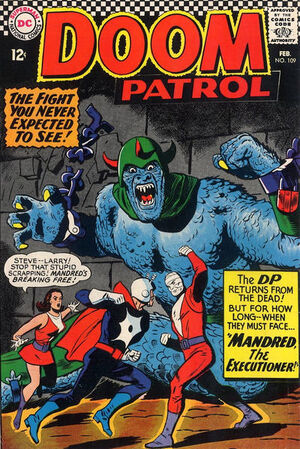 Appearing in "Mandred the Executioner"Edit

Synopsis for "Mandred the Executioner"Edit

Beast Boy returns the seemingly deceased Doom Patrol members and Mento to the Chief's lab, where they are able to be revived, due to an unknown party's sabotage of the Brotherhood's murder weapon. Keeping their survival secret so as to lure their enemies into tipping their hand, the team is soon battling Mandred, a giant android created by Garguax, who has been sent to destroy the Chief and Beast Boy. Meanwhile, Steve Dayton's estate continues his legal action against Galtry.

Appearing in "Flight Into Fear"Edit

Synopsis for "Flight Into Fear"Edit

Larry is hired by Harkness, ostensibly to perform low level bombing of a volcano so the island can be mined for its rich nitrate deposits. But in discussing it with some colleagues, they tell him that four other pilots have died trying to perform the same task. Larry confronts Harkness (bursting through his bedroom door). When Harkness offers to void the contract, Larry says he's still going through with it - to prove he's still a whole man, and to show-up Harkness.

Weeks of preparation and examination of flight recordings reveals the island's secret to Larry. Preparing for his flight, Larry turns to Charlie Link, a "top grease monkey" or mechanic, as his friend Joe is out of town. In reality, Joe has been paid off to put Link on the job of servicing Larry's plane.

Discovering a radioactive bomb in his plane that was interfering with his instrumentation, Larry eventually reaches the island. His theory is that the volcano is so finely balanced that the vibrations from the other planes set it off and blasted them out of the sky with hot air. Larry plans to glide in. In doing so he was able to drop his bomb and seal of the volcano.

Returning home, Harkness greets him with delight, as he could only profit from Larry's safe return. However, Larry reasoned that "Charlie", his substitute mechanic, had the best opportunity to plant the bomb in his plane. He quickly unmasks him, revealing Charlie to be -- Dr. Death, who was intent on making sure Larry failed at eveything so he would eventually join the bad doctor.

Later, Larry thinks to himself that if he fails in his next attempt to fit back into society, he may very well need to take Dr. Death up on his offer.

Retrieved from "https://heykidscomics.fandom.com/wiki/Doom_Patrol_Vol_1_109?oldid=1424213"
Community content is available under CC-BY-SA unless otherwise noted.