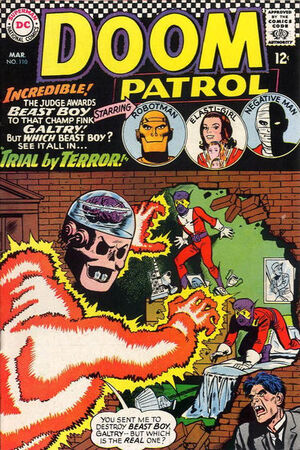 Appearing in "Trial by Terror"Edit

Synopsis for "Trial by Terror"Edit

Believing the Doom Patrol to be dead,[1] the Brain plans to attack the Chief at Doom Patrol Headquarters using a body of pure light-energy. The DP attack him and Mallah, but the Brotherhood escape in their rocket. Although the Chief theorized that Madame Rouge was in love with Larry, but it was in fact he she loved.

The body of Mandred remotely revives by the Brain's broadcast solar energy.

Meanwhile, Dayton fails in court to prove Galtry's defrauding Logan of his inheritance as witness after witness denies that Galtry did such a thing. Later that night, Mento visits Galtry's residence and obtains some of his financial papers.

As Logan intrudes on the Chief's breakfast, a re-powered Mandred attacks. The Doom Patrol assist and Mandred makes good his escape.

In court, Dayton's lawyer produces proof that Galtry has been stealing millions. However, Galtry's lawyer attempts to prove that Logan is, in fact, Beast Boy and that Steve Dayton has thus endangered the life of a minor. Rita leaves the courtroom, claiming sickness.

With Garfield Logan in the courtroom, Beast Boy enters and proceeds to argue that they are two separate people. Dayton offers to adopt Logan.

At the Dayton Mansion, Rita pulls off a Beast Boy mask and reveals the plan to everyone.

Retrieved from "https://heykidscomics.fandom.com/wiki/Doom_Patrol_Vol_1_110?oldid=1424214"
Community content is available under CC-BY-SA unless otherwise noted.