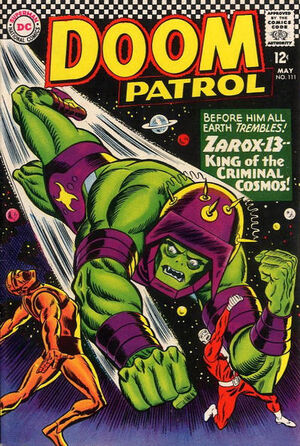 Zarox-13, Garguax's criminal superior from his home planet, comes to Earth with his followers. The Doom Patrol attempts to trick him into believing that Earth possesses an unconquerable high-technology civilization, but Garguax intervenes to expose the ruse. When Zarox joins Garguax as an ally of the Brotherhood of Evil, the Brain suspects the aliens of treachery and secretly proposes a temporary alliance between the Brotherhood and the Doom Patrol to stop Zarox.

Despondent over his current state, Larry contemplates giving up when a visit from an old man named Tolliver suggests an idea. Tolliver is part of a recreation center for seniors called The Sunshine Club. Tolliver has brought with him some delicious cookies made from his mother's recipe. The Club is running low on funds when Larry suggests selling the cookies, as the Girl Scouts do. A visit from Larry inspires the seniors to pitch in.

The first batch of cookies is awful, as Tolliver tried to omit a special ingredient - a rare spicy herb that only grows in Argentina. Neg Man makes a quick trip to pick some and the next batch of cookies is fine. Part of the publicity is presenting boxes of cookies to the President, Vice-President, and Speaker of the House, a Senator Sloane.

Larry discovers that "Tolliver" is, in fact, Dr. Death who quickly encases him in a lead chamber where "not a quantum of light" comes through. Dr. Death reveals that the herb contains selenium, an element capable of inducing suicidal madness. He discovered a way of stimulating that madness through radio commands. By inducing the President and Vice-President to commit suicide, the Speaker of the House takes over. Death has plans to replace Sloane with a duplicate under his control, thereby ruling the United States.

The radio signal begins its solemn function, as the men start to end their lives. At that moment, the Chief appears to "Tolliver"claiming to have left behind something when he was measuring the place for the electronic stove that was installed. Shining his flashlight on the floor he fails to find it and leaves.

Dr. Death taunts Larry in his coffin, but Neg Man is already gone, saving the men. The Chief has left his business card. After Larry turned Death over to the police he visits the Chief who explains that the flashlight was a laser, which he used to free Neg Man, presumably by creating a small hole in the lead chamber.

The Chief offers Larry and this other two guests (Rita and Cliff) to opportunity to join together in a second chance for life.

Retrieved from "https://heykidscomics.fandom.com/wiki/Doom_Patrol_Vol_1_111?oldid=1424215"
Community content is available under CC-BY-SA unless otherwise noted.