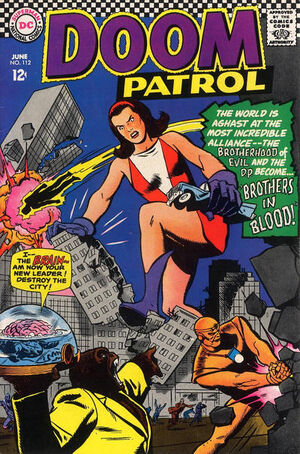 Appearing in "Brothers in Blood!"Edit

Synopsis for "Brothers in Blood!"Edit

The Doom Patrol and the Brotherhood of Evil become temporary partners against Zarox-13, who plots the destruction of the world. Madame Rouge becomes a "hostage" in the Doom Patrol "camp" to ensure the Brotherhood's good behavior, enabling the Chief to learn her true origin.

After an automobile accident, actress Laura De Mille suffered brain damage and became an uncontrollable schizophrenic, until "cured" by being turned totally to evil by the Brain.

The Doom Patrol and the Brotherhood, together with Mento and Beast Boy, defeat Zarox and his followers, who escape into space by teleportation. The alliance of the two enemy teams is ended, but the Chief hatches a scheme to rehabilitate Madame Rouge permanently.

Appearing in "Waif of the Wilderness"Edit

Synopsis for "Waif of the Wilderness"Edit

In this retelling of Beast Boy's origin, Gar Logan gains the power to take on any animal form as a child, as well as green hair and skin, when his medical researcher father uses an experimental process to save him from a fatal jungle disease. After his parents drown in a flood, the future Beast Boy dwells alone in the jungle with the aid of natives in a nearby village. Unknown to him, Nicholas Galtry has been appointed his legal guardian and is searching for him.

Retrieved from "https://heykidscomics.fandom.com/wiki/Doom_Patrol_Vol_1_112?oldid=1484408"
Community content is available under CC-BY-SA unless otherwise noted.