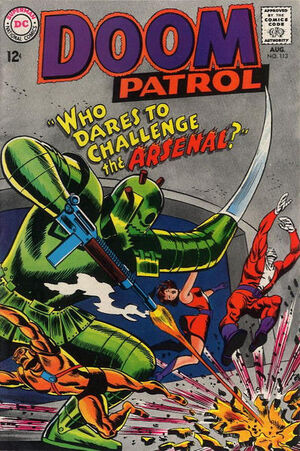 Appearing in "Who Dares to Challenge the Arsenal"Edit

Synopsis for "Who Dares to Challenge the Arsenal"Edit

The Doom Patrol matches wits with the Arsenal, a criminal whose mechanical body houses a multitude of super-weapons. The Chief, meanwhile, proves too busy to help his teammates, as he uses a secret device to reverse Madame Rouge's mental patterns, unaware that the Brain is using a similar device to strengthen her evil side at the same time.

Appearing in "Diamonds of Destiny"Edit

Synopsis for "Diamonds of Destiny"Edit

The young Gar Logan foils the plans of a pair of diamond thieves who form a temporary partnership with the unscrupulous witch-doctor of the nearby native tribe. Gar is kidnapped by the villains, however, who hope to exploit his powers to stage a robbery.

Retrieved from "https://heykidscomics.fandom.com/wiki/Doom_Patrol_Vol_1_113?oldid=1424217"
Community content is available under CC-BY-SA unless otherwise noted.