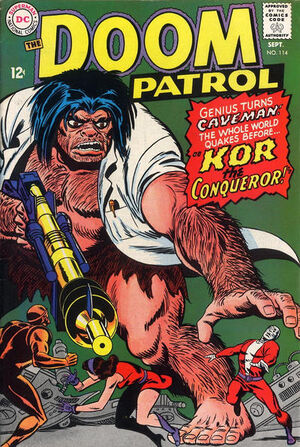 An experiment in time warps goes wrong and transforms Dr. Anton Koravyk into Kor, a Neanderthal man who menaces the city with Dr. Koravyk's powerful sonic weapon. The Doom Patrol battles and overcomes him, then changes him back to normal, while the Chief continues his efforts to "cure" Madame Rouge.

Appearing in "The Kid Who Was King of Crooks"Edit

Synopsis for "The Kid Who Was King of Crooks"Edit

The diamond thieves who have kidnapped him use Gar Logan's shape-changing powers to rob a highly guarded vault in Johannesburg. The criminals perish, however, when the child's idea of a practical joke causes each to suspect the other of treachery, and they kill each other.

Retrieved from "https://heykidscomics.fandom.com/wiki/Doom_Patrol_Vol_1_114?oldid=1424218"
Community content is available under CC-BY-SA unless otherwise noted.